ACE in the hole

Surface ocean temperature has been shown to be a key condition for development of tropical and cyclonic storms, though there are strongly conflicting opinions on its impact on long term trends. The present study looks at correlation of accumulated cyclone energy and surface sea temperature in the N. Atlantic basin and finds common periodicities linking the two. The similarity between the post-2005 drop in cyclone energy and a similar drop in the record from the 1930-1950 period is discussed.

A definition of accumulated cyclone energy is provided [here]:

“ACE” = Accumulated Cyclone Energy – An index that combines the numbers of systems, how long they existed and how intense they became. It is calculated by squaring the maximum sustained surface wind in the system every six hours that the cyclone is a Named Storm and summing it up for the season. It is expressed in 104 kt2.

The ACE metric is intended to provide better insight that simply counting the number of storms, since this has been strongly affected by improvements in detection and reporting and possible statistical variation in the proportions of storm intensity.  Since storm energy originates in ocean heat energy (Gray 1968) [3] , total cyclone energy is a more appropriate metric than quantities such as storm count, when searching for possible a causal link between tropical cyclone activity and climate variability.

Documentation of Atlantic Hurricane Database Re-analysis Project is provided [here]. The Atlantic hurricane database (or HURDAT) extends back to 1851. However, because tropical storms and hurricanes spend much of their lifetime over the open ocean – some never hitting land – many systems were “missed” during the late 19th and early 20th Centuries (Vecchi and Knutson 2008). Starting in 1944, systematic aircraft reconnaissance was commenced for monitoring both tropical cyclones and disturbances that had the potential to develop into tropical storms and hurricanes. This did provide much improved monitoring, but still about half of the Atlantic basin was not covered (Sheets 1990). Beginning in 1966, daily satellite imagery became available at the National Hurricane Center, and thus statistics from this time forward are most complete (McAdie et al. 2009).

The annual accumulated cyclone energy derived from HURDAT2 database is obtained [here].  Much research has been done recently to try to improve the earlier periods of the record. [1] [2]  Many smaller storms are now reported that would not have been detected without modern surveying techniques [2].

Since ERSST has a strong annual variation, and HadSST3 has considerable high frequency noise and annual residuals, both were low-pass filtered using a 3-sigma gaussian filter with sigma = 12 mo. This removes most variability below about 2 years in period.

Most of the post-WWII cooling is the result of these somewhat speculative “bias corrections” in particular the phasing in of the “canvas to rubber bucket”” adjustment from 1954 to 1980. The adjustments made to HadSST3 were discussed in detail in the following article On the adjustments to the HadSST3 data set

The N.Atlantic annual cyclone season peaks in late summer. Annual ACE data were plotted at the mid-point of the year. Where ACE is shown low-pass filtered, a similar 3-sigma gaussian filter was used.

ACE data have also been affected by changes in shipping routes and usage during the WWII period, possibly leading to significant non-reporting of storms well away from land.

In general all three datasets should be regarded as unreliable during the WWII period.

There is a strong similarity in the ACE and SST data, both at inter-decadal and inter-annual scales. The much discussed 60 year pseudo-cyclic variability is clearly seen in both SST and ACE. The inter-annual variability is particularly close in the more reliable post-1950 period but shows a strong similarity throughout the record. Since cyclones derive their energy from the heat of the ocean surface [3] this not particularly surprising but provides a means of comparing two fundamentally different measurements of climatic conditions.

There are two very visible discrepancies in the two metrics. War-time ACE is very low and probably reflects some degree of under-sampling in that period. However, the low activity goes from 1934 to 1949, a far broader period that can be accounted for by WWII disruption to shipping. Also systematic airborne monitoring was started in 1944 (Klotzbach & Landsea 2015) [4] and there was no noticeable increase in ACE until 1950, suggesting the lower level of activity in the period, though less reliable, is real. A detailed account of uncertainty in the HURDAT data is provided by Landsea & Franklin (2013):[5]

There is a large peak in ACE 1893 that is opposed to the variation shown in the SST record. 1952 also shows a mismatch in the two records. With those two exceptions, the inter-annual variability in the two metrics follow each other quite closely throughout the record.

Applying a low-pass filter to the annual ACE data allows a more direct comparison to SST.

An interesting feature becomes apparent: unlike SST, the end of the cyclone data has dropped sharply since its peak in 2004/2005. This looks very similar to the trough that started in the 1930s.

This drop is also reported by Klotzbach et al (2015) [5] which includes the most recent data.

It can also be noted that the inter-annual variations correlate much more closely during both the early and later 20th c. warming periods.

Other studies, such as Holland & Webster (2007)[6] , based on storm count rather than ACE seem to give a less clear picture of the SST linkage and, due to earlier publishing date, do not include the more recent decline. 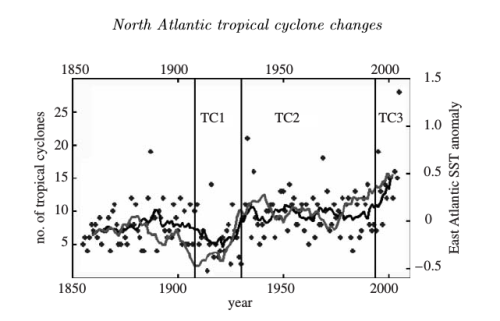 The two main common periods are close to 9 and 60 years, with a smaller peak around 5.6 years. The circa 9 y peak is centred on 9.07 years. It is noted that this is exactly the mean frequency corresponding to 8.85 y and 9.3 y, both of which are lunar cycles. The 8.85 y period corresponds to the precession of the lunar of apsides and 9.3 y is half the nodal precession period.

The 9.1 year periodicity appears to be the same periodicity reported as common to Atlantic and Pacific SST by Muller et al (2013) [8] and shown to be of lunar origin by N Scaffeta [9] by examining data from the NASA / JPL ephemeris.

Although tides are traditionally measured by the height of the water level, it should be remembered that tides are longitudinal waves and the principal movement of water is horizontal, not vertical. Long period tidal variations have to potential to move vast volumes of surface water and hence heat, thereby modifying ocean currents. This seems to have received little recognition or quantitative study.

While there is still too little data to confirm the length of the post 2005 reduction in activity, the dearth of land falling hurricanes in the U.S. has been widely reported, as has the failure of hurricane activity to match the “hottest year ever” claims made about SST.

If this lower level of activity contintues in the next few years, it will suggest that the stagnant temperatures of “the pause”, like those of the 30s and 40s, are not conducive to a high level of hurricane activity. This should then inform attempts to model cyclone formation and intensity.

While there is clearly a linkage between SST and cyclone energy, it is not a simple one-to-one relationship of warmer SST causing ‘more frequent and more extreme’ storms. A more detailed study of other factors such as wind shear and vorticity is covered in Emanuel 1995 [14]. A brief overview of more recent work is provided by Vecchi and Soden 2007[15]

Some studies of the correlation of SST and cyclone intensity and frequency [10] have, for reasons partly motivated by data quality issues, focused on the post-1960 period. However, it is clear that this will not give an accurate or representative assessment.  Focussing on a limited period dominated by a rising section of the data runs a substantial risk of drawing false conclusions.

… show that this index [potential destructiveness of hurricanes derived from the third power of wind speed] has increased markedly since the mid-1970s. This trend is due to both longer storm lifetimes and greater storm intensities. I find that the record of net hurricane power dissipation is highly correlated with tropical sea surface temperature, … My results suggest that future warming may lead to an upward trend in tropical cyclone destructive potential…

This paper’s conclusions are partially based on an analysis of poorly documented and biased tropical cyclone (TC) maximum wind (Vmax ) data from the Northwest (NW) Pacific. This study presents a sum of each tropical cyclone’s maximum winds – a very hard measurement to realistically obtain over a 3-5 decade period of changing maximum wind measurement techniques. The author then cubes these maximum wind speeds (Vmax3) of questionable accuracy. Such a cubing process greatly exaggerates any errors in the original Vmax estimate.

Almost any climate dataset will will show either an upward or downward trend. Suggesting evidence of causation from nothing more than sign of the long term trend has little justification. Extrapolating such a relationship outside the period of study, on nothing more than a baseless “if the current trend continues”, is more likely to be misleading than informative. There seems to be some unspoken assumptions that the most likely outcome is that a trend calculated over some arbitrary period will continue, while no logical or statistical basis for that assumption is ever put forward.

A rapid drop in hurricane energy is noted before the El Chichon and Mt Pinatubo eruptions (figure 5) and is already visible in the SST. In fact, both events were preceded by a higher level of cyclone activity that coincided with a peaks in the 9 y lunar cycle in SST and also coincided with peaks in solar activity. The temporal coincidence of all these factors raises the danger of false attribution.

Volcanoes play a significant role in attempts to model past climate. Generally, on a global scale, climate models produce little more than general GHG driven warming and a lot of internal noise. The cooling effect attributed to major stratospheric eruptions is important in putting a few bumps and dips in about the right place to give the visual impression that the model, at least roughly, resembles the recent climate history.

Secular trends underlying the  60 year pseudo-periodic variability in both SST and cyclone data may be determined more by sampling bias and the various adjustments and corrections applied to SST than they are by possible long term changes in the physical conditions. As such, caution should be applied before suggesting that they represent a real indication of a possible long term causal relationship.

The clear 60 y and 9 y periodicities draw attention to the need to investigate long period lunar tidal influences on ocean and atmospheric climate variables. This is needed in order to quantify and account for natural variability and also to avoid false attribution to other climate variables. In particular, large scale variations in surface transport of heat by ocean currents due to long period tides appears to be a much neglected factor [JC note:  see this post about Charles Keeling, who was interested in the topic of tides and climate variability].

There is a stronger correlation between ACE and SST during the two major warming periods of the 20th century than in the plateaux or cooling periods. SST is not the single dominant factor determining cyclone energy. There is not a trivial linear relationship and it is probably not appropriate to project relationships derived from the study of data primarily from warming periods onto times of relatively stable SST conditions.

There is an indication that the drop in North Atlantic hurricane activity which apparently occurred during the pre-WWII warm period is repeating during the current temperature plateau.

Update:  The following produces a beat pattern of about 59y that would match the periodicity found in the article. This may explain much of problem with
finding a consistent correlation to solar forcing in absence of the
recognition of a significant lunar periodicity.

JC comment:  As with all guest posts, please keep your comments civil and relevant

This entry was posted in Hurricanes. Bookmark the permalink.