A discussion thread to ponder the uncertainties in glacial isostatic adjustment and the implications for past and future sea level rise.

I’m in the process of completing my report on the sea level rise, the preliminary notes for which were presented in my recent 7 part series Sea level rise acceleration (or not).  I very much appreciate all the input I received in the comments and via email.

While glacial isostatic adjustment was discussed (or at least mentioned) in several of these posts, I did not take a critical, skeptical look at what has been done.  Nor did I summarize the uncertainties and their implications for assessments of past and predictions of future sea level rise, particularly local sea level rise.

I realize we have discussed this before, but I want to make sure I am not missing the boat in some way.

The University of Colorado web page provides this explanation:

The correction for glacial isostatic adjustment (GIA) accounts for the fact that the ocean basins are getting slightly larger since the end of the last glacial cycle. GIA is not caused by current glacier melt, but by the rebound of the Earth from the several kilometer thick ice sheets that covered much of North America and Europe around 20,000 years ago. Mantle material is still moving from under the oceans into previously glaciated regions on land. The effect is that currently some land surfaces are rising and some ocean bottoms are falling relative to the center of the Earth (the center of the reference frame of the satellite altimeter). Averaged over the global ocean surface, the mean rate of sea level change due to GIA is independently estimated from models at -0.3 mm/yr. The magnitude of this correction is small (smaller than the ±0.4 mm/yr uncertainty of the estimated GMSL rate), but the GIA uncertainty is at least 50 percent. However, since the ocean basins are getting larger due to GIA, this will reduce by a very small amount the relative sea level rise that is seen along the coasts.

This means that if we measure a change in GMSL of 3 mm/yr, the volume change is actually closer to 3.3 mm/yr because of GIA. We apply a correction for GIA because we want our sea level time series to reflect purely oceanographic phenomena. In essence, we would like our GMSL time series to be a proxy for ocean water volume changes. This is what is needed for comparisons to global climate models, for example, and other oceanographic datasets.

This correction is now scientifically well-understood and is applied to GMSL estimates by nearly all research groups around the world. Including the GIA correction has the effect of increasing previous estimates of the global mean sea level rate by 0.3 mm/yr. 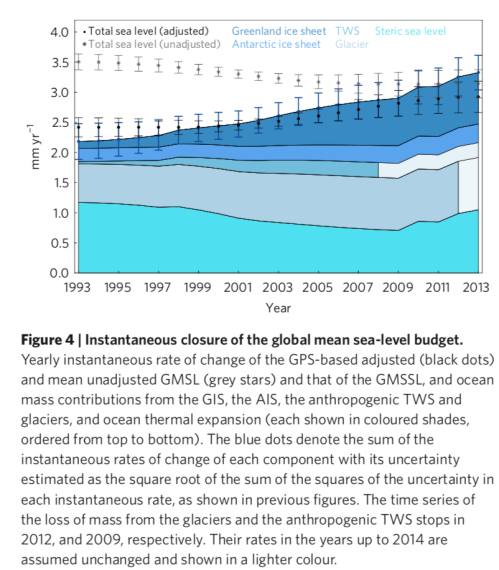 Tamisiea 2011 wrote a comprehensive review on on the GIA.  From the abstract:

Studies determining the contribution of water fluxes to sea level rise typically remove the ongoing effects of glacial isostatic adjustment (GIA). Unfortunately, use of inconsistent ter- minology between various disciplines has caused confusion as to how contributions from GIA should be removed from altimetry and GRACE measurements. In this paper, we review the physics of the GIA corrections applicable to these measurements and discuss the differing nomenclature between the GIA literature and other studies of sea level change. We then examine a range of estimates for the GIA contribution derived by varying the Earth and ice models employed in the prediction. We find, similar to early studies, that GIA produces a small (compared to the observed value) but systematic contribution to the altimetry estimates, with a maximum range of −0.15 to −0.5 mm/yr. Moreover, we also find that the GIA contribution to the mass change measured by GRACE over the ocean is significant. In this regard, we demonstrate that confusion in nomenclature between the terms ‘absolute sea level’ and ‘geoid’ has led to an overestimation of this contribution in some previous studies. A component of this overestimation is the incorrect inclusion of the direct effect of the contemporaneous perturbations of the rotation vector, which leads to a factor of ∼two larger value of the degree two, order one spherical harmonic component of the model results. Aside from this confusion, uncertainties in Earth model structure and ice sheet history yield a spread of up to 1.4 mm/yr in the estimates of this contribution. However, even if the ice and Earth models were perfectly known, the processing techniques used in GRACE data analysis can introduce variations of up to 0.4 m/yr. Thus, we conclude that a single-valued ‘GIA correction’ is not appropriate for sea level studies based on gravity data; each study must estimate a bound on the GIA correction consistent with the adopted data-analysis scheme.

Concerns about the analysis of satellite data for sea level rise were summarized in a previous post Sea level rise acceleration (or not): Part IV Satellite era record (scroll down towards the bottom), focusing on an exchange between Nils Axel Morner and Steve Nerem.

All this makes my head hurt.  The punchline of all this seems to be that if you assume that the ‘glass’ remains constant in size and shape, then the amount of water in the glass is increasing, at an apparently accelerating  rate.  However, if the glass is expanding in diameter, then the increase in the level of the water from increasing the amount of water in the glass rises more slowly.

This post was actually triggered by a recent article: Rising ground under West Antarctica could prevent ice sheet collapse.  This is based on a recent paper by Barletta et al. who found that the ground under the rapidly melting Amundsen Sea Embayment of West Antarctica is rising at the astonishingly rapid rate of 41 millimeters, or more than 4 cm, per year.  If this trend increases as the study projects, then the grounding line, which is the spot where the marine-based ice shelf of the Pine Island Glacier meets bedrock, will have risen by 8 meters, or 26.2 feet, in 100 years.  Such rapid rebound could stabilize the ice sheetby driving the grounding line for the marine ice sheet towards the sea, leading to less of the underside of the ice being exposed to the warm ocean.  However, the rising of the ground may have caused scientists to underestimate ice loss in the region by 10%, since the rising Earth partially hides the gravity signal coming from ice loss.

These new measurements of Glacial Isostatic Adjustment (GIA), the scientific term for uplift due to ice sheet unloading, are an important part of a wider story about the fate of the Antarctic ice sheets, said Doug Kowalewski, the Antarctic Earth Sciences program director in the National Science Foundation’s Office of Polar Programs (OPP).

“The observed GIA response captured by the POLENET array is an order of magnitude greater than previously thought. The upcoming challenge is to couple the GIA observations with ice-sheet models,” Kowalewski said.

While this is good news for the WAIS, it does not exactly inspire confidence in our quantitative understanding of the GIA.

Those that are skeptical of the satellite observations argue ‘but the tide guages.’  As reported in Part IV, there have been several studies that compare the tide guage with altimeter values during the period since 1993 and find good agreement:

Hay et al. (2015): Our analysis, which combines tide gauge records with physics-based and model-derived geometries of the various contributing signals, also indicates that GMSL rose at a rate of 3.0 ± 0.7 millimetres per year between 1993 and 2010 . . . is also consistent with the estimate based on TOPEX and Jason altimeter measurements (3.2 ± 0.4 mm yr-1 for the period 1993–2010.)

So, what actually went into these analyses?  Dangendorf (2016) describes what they did:

Here we present a GMSL reconstruction that accounts for ocean volume redistribution, local observations [mostly global positioning system (GPS)] of VLM, and geoid changes caused by ongoing GIA, present-day ice melt, and TWS, including ground- water depletion and water impoundment behind dams. We base our approach on an area-weighting average technique and on recent scientific achievements made for each individual correction. Our tide gauge selection consists of 322 stations, for which VLM corrections with uncertainties of less than 0.7 mm/yr  are available. After accounting for VLM, each tide gauge is further corrected for geoid changes from ongoing GIA, glacier/ice-sheet melting, and TWS. The tide gauges are then grouped into six coherent regions objectively defined to account for water volume redistribution. Within each oceanic region, a regional mean sea level curve is built by recursively combining the two nearest stations into a virtual station halfway, until only one station is left.

After all this, one is still left with the argument ‘but the tide guages.’

What does all this mean for local sea level rise? Pretty much nothing, apparently, with regards to recent and historical local sea level rise. Looking at raw, local tide gauge data in many locations shows much lower values over the past 3 decades than 3.2 mm/yr  (JC’s anecdotal eyeball estimate), with the exception of regions that are sinking from geological processes or land use practices.

What matters to local decision makers is their local rate of sea level rise, relative the local coast (whether it is rising or sinking for whatever reason).  Understanding the causes of their local sea level rise helps them understand what they can do to address the problem.

I would appreciate any additional insights you have on this topic, recent references, etc.

This entry was posted in Oceans. Bookmark the permalink.