The debate: my presentation

My presentation  is provided here.  This is being posted at the start of the event.

I HUGELY appreciate the comments that you provided on that one slide [link], both in the comments and sent via email.  I definitely got the message.

I will be very interested in your reactions to my presentation [ debate ].  My talking points are provided below, with some of the ppt slides. 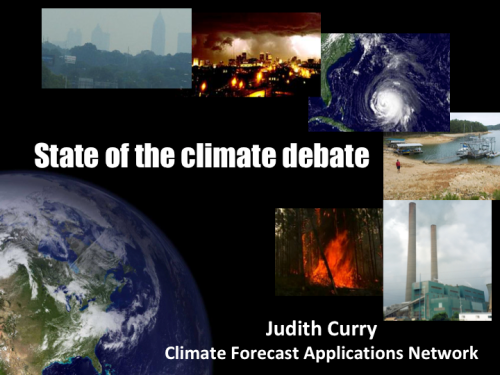 Good evening everyone.  Thank you very much for coming, I look forward to our conversation this evening.

There is widespread agreement on these basic tenets:

However, there is substantial disagreement about the issues of greatest consequence:

I have bolded the two issues that are the focus of this conversation.

Now there is nothing wrong or bad about scientific disagreement.  In fact, the scientific process thrives in the face of disagreement, which motivates research in new directions.

On the left hand side is the perspective of a stable climate that changes in response to changes in atmospheric CO2.  In other words, carbon dioxide as the climate control knob.  It’s a simple and seductive idea.

However some scientists think that this is a misleading oversimplification.  They regard climate as a complex nonlinear dynamical system, with no simple cause and effect.  Climate can shift naturally in unexpected ways, owing to natural internal variability associated with large-scale ocean circulations.

The point of this cartoon is that if you only look at one part of the elephant, you will misdiagnose.  You need to look at the entire elephant.

The bottom line is that we don’t yet have a unified theory of climate variability and change that integrates all this.

5    Disagreement: cause of climate change

So does this rather arcane scientific debate actually matter?  Well, yes it does.

If you assume that carbon dioxide is the control knob for climate, than you can control climate by reducing CO2emissions.

If you assume that climate change primarily occurs naturally, then the Earth’s climate is largely uncontrollable, and reducing CO2emissions will do little or nothing to change the climate.

Here is how and why I changed my mind.

In 2010, I started digging deeper, both into the science itself and the politics that were shaping the science.  I came to realize that the policy cart was way out in front of the scientific horse.

The 1992 UN Climate Change treaty was signed by 190 countries before the balance of scientific evidence suggested even a discernible human influence on global climate.  The 1997 Kyoto Protocol was implemented before we had any confidence that most of the warming was caused by humans.  There was tremendous political pressure on the IPCC scientists to present findings that would support these treaties, which resulted in a manufactured consensus.

Here is how the so-called consensus and increasing confidence in human-caused global warming became a self-fulfilling prophesy.

You find what you shine a light on.  In other words, we have only been looking at one part of the elephant.

Motivated by the UN Climate treaty and the IPCC and government funding, climate scientists have focused primarily on human-caused climate change.  Other factors important for understanding climate variability and change have been relatively neglected. I have highlighted long-term ocean oscillations and solar indirect effects, since I think that these are potentially very important on decadal to century timescales.

One of the most consequential impacts of a warming climate is sea level rise. These two statements by climate scientists typify the alarm over sea level rise:

Is this alarm justified by the scientific evidence?

9 Is CO2 the control knob for global sea level rise? 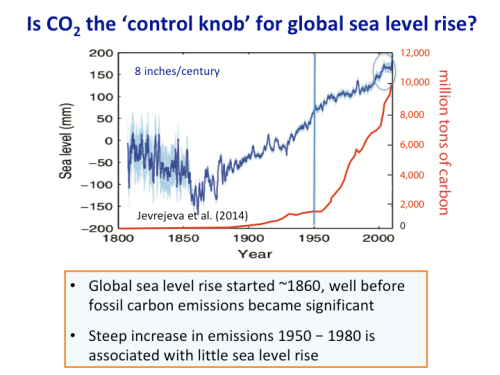 The red curve shows global emissions of carbon dioxide from burning of fossil fuels. You can see that global sea levels were rising steadily long before fossil fuels emissions became substantial. You can also see that the steep increase in emissions following 1950 is associated with very little sea level rise between 1950 and 1990.

An uptick in sea level rise occurred in the 1990’s, which is circled.  Lets take a closer look to see what is causing this.

What is causing this increase?  The turquoise region on the bottom of the diagram relates directly to expansion from warming.  You actually see a decrease until about 2009, which has been attributed to the cooling impact following the eruption of Mount Pinatubo in 1992.

So, is the Greenland melting caused by increasing CO2 emissions?

This figure shows the Greenland mass balance for the 20th century. Ice sheet mass balance is defined as increase from snowfall, minus the decrease from melting.  You can see the negative mass balance values after 1995, reflecting mass loss that raises sea level.  If you look earlier in the record, you see even larger negative values particularly in the 1920’s and 1930’s.  Clearly, the high surface mass loss rates of recent years are not unprecedented, even in the 20thcentury.

The bottom figure shows variations in the Atlantic Multidecadal Oscillation, which is an important mode of natural internal climate variability.  The AMO is a powerful control on the climate of Greenland.

From this analysis, I can only conclude that CO2 emissions are not the main cause of sea level rise since the mid 19thcentury.

The scientific evidence that I’ve shown you on the preceding slides is well known to the IPCC.  Here are some statements that the most recent IPCC report made on sea level change and Greenland: 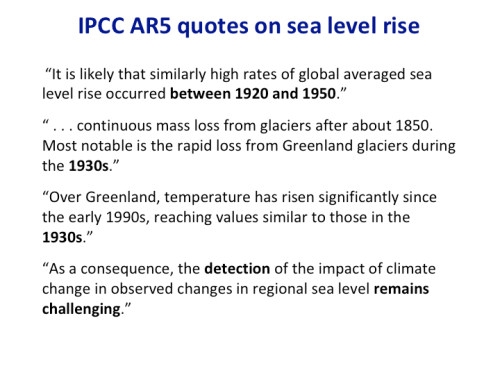 13 To what extent are man-made CO2 emissions contributing to climate change?

I’ve been asked to respond to the question “To what extent are man-made CO2 emissions contributing to climate change?”

The short answer is:  ‘we don’t know.’ The reason is that we don’t know how to disentangle natural internal variability from the effects of CO2–driven warming

Even the IPCC doesn’t claim to know exactly. The most recent IPCC assessment report says it is ‘extremely likely’ to be  ‘more than half.’ ‘More than half’ is not very precise.

Given the IPCC’s neglect of multi-decadal and longer time scales of natural internal variability, I regard the extreme confidence of their conclusion to be unjustified

So here is my personal assessment, using the jargon of the IPCC:  Man-made CO2emissions are as likely as not to contribute less than 50% of the recent warming

14  Should we reduce emissions to prevent warming?

Even if you believe the climate model projections, there is still genuine disagreement regarding whether a rapid acceleration away from fossil fuels is the appropriate policy response.

One side argues that reducing CO2emissions are critical for preventing future dangerous warming of the climate.  The other side argues that any reduction in warming would be minimal and at high cost, and that the  ‘cure’ could be worse than the ‘disease’.

What makes most sense to me is Climate Pragmatism, which has been formulated by the Hartwell group.  Climate pragmatism has 3 pillars:

I would like to make a few comments on the state of the scientific and public debate on climate change.

Here is my take on the Madhouse effect.  The madhouse that concerns me is one that has been created by climate scientists.  The madhouse is characterized by

In closing, I would like to make a personal statement, to clarify my motives

I regard my job as a scientist to critically evaluate evidence and to continually challenge and reassess conclusions drawn from the evidence.

A year ago I resigned my tenured faculty position because of academic political pressures that interfered with doing my job.  My resignation was a direct result of ‘science madhouse effect’ discussed on the previous slide.

My direct engagement with public is via my blog Climate Etc.  where we discuss a broad range of topics related to climate science and policy.  I hope you’ll join us at judithcurry.com.

This entry was posted in Communication, Skeptics. Bookmark the permalink.

460 responses to “The debate: my presentation”