Abstract: Global surface-temperature is a fundamental measure of climate change. We discuss bias estimation for sea-surface temperature and recommend the improvements to data, observational metadata, and uncertainty modeling needed to make progress.

Bias adjustments have been based either on physical models of the observing processes or on the assumption of an unchanging relationship between SST and a reference data set such as night marine air temperature. These approaches produce similar estimates of SST bias on the largest space and timescales, but regional differences can exceed the estimated uncertainty. We describe challenges to improving our understanding of SST biases. Overcoming these will require clarification of past observational methods, improved modeling of biases associated with each observing method, and the development of statistical bias estimates that are less sensitive to the absence of metadata regarding the observing method.

New approaches are required that embed bias models, specific to each type of observation, within a robust statistical framework. Mobile platforms and rapid changes in observation type require biases to be assessed for individual historic and present-day platforms (i.e., ships or buoys) or groups of platforms. Lack of observational metadata and of high-quality observations for validation and bias model development are likely to remain major challenges.

This paper provides a very good overview of the issues, and makes 9 recommendations for much needed improvements for the SST data set and the assessments of the uncertainties.

Sea surface temperature (SST) records are subject to potential biases due to changing instrumentation and measurement practices. Significant differences exist between commonly used composite SST reconstructions from the National Oceanic and Atmospheric Administration’s Extended Reconstruction Sea Surface Temperature (ERSST), the Hadley Centre SST data set (HadSST3), and the Japanese Meteorological Agency’s Centennial Observation-Based Estimates of SSTs (COBE-SST)  from 2003 to the present. The update from ERSST version 3b to version 4 resulted in an increase in the operational SST trend estimate during the last 18 years from 0.07° to 0.12°C per decade, indicating a higher rate of warming in recent years (Karl et al., 2015). We show that ERSST version 4 trends generally agree with largely independent, near-global, and instrumentally homogeneous SST measurements from floating buoys, Argo floats, and radiometer-based satellite measurements that have been developed and deployed during the past two decades. We find a large cooling bias in ERSST version 3b and smaller but significant cooling biases in HadSST3 and COBE-SST from 2003 to the present, with respect to most series examined. These results suggest that reported rates of SST warming in recent years have been underestimated in these three data sets.

Kevin Cowtan has posted a nice summary on his website [link], that includes a video explanation by Zeke Hausfather.

These are the main figures from the paper: 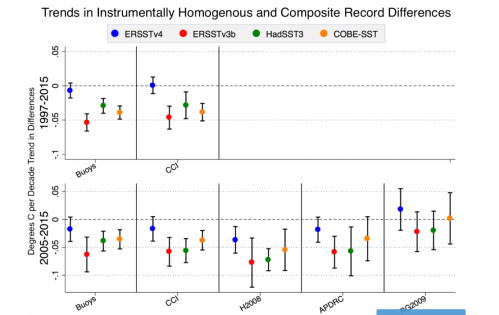 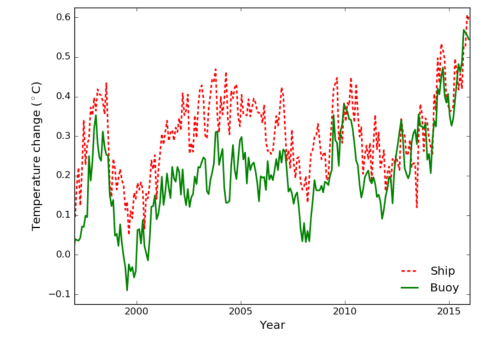 Plus this additional figure that Zeke sent me:

For some context on this issue, see these previous posts:

I’m not sure how we will ever sort out the issues in the historical record prior to about 1980, and especially during WWII and prior to 1920.

But the more vexing issue is the discrepancies in the recent record — the last two decades and even the last 5 years.

Sorting these issues out, with comprehensive assessment of errors and uncertainties in the record, is very important.

We really need to get the data records for the last two decades sorted out.

With regards to Zeke’s paper, I haven’t had the time to dig into the paper.  I will say that this kind of analysis definitely needed doing.  And I give Zeke an ‘A’ (hah! still playing professor) for communicating the results of this research.  I understand that they have been giving a lot of interviews on this, lets see how this gets played in the media.

This entry was posted in Data and observations, Oceans. Bookmark the permalink.