by Planning Engineer and Rud Istvan

Just because something works in one place’s circumstances does not mean it will work elsewhere under different circumstances. 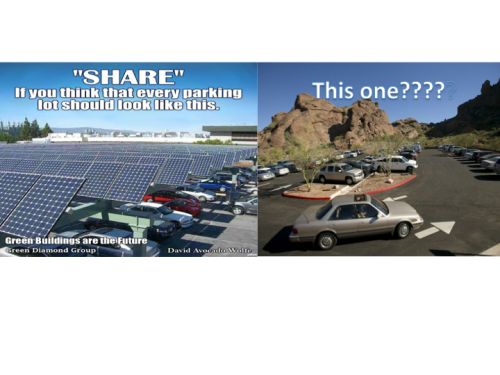 Perhaps you’ve seen the posting on the left, or others with a similar message. With any thought though, it soon becomes clear that not “every” parking lot is a good candidate for co-functioning as a solar generation station. Parking lots are incredibly diverse: some lack sun, some can’t support the infrastructure, some are far from power needs and converting some parking lots would unduly sacrifice the local environment.

The Green Diamond Group was likely engaging in a bit of hyperbole. Unfortunately, many embrace such hyperbole without thinking, such that unrealistic expectations abound when it comes to the potential capabilities, performance and applicability’s of many renewable resources.

This posting will challenge some common misperceptions.

Selection of energy technologies is a “horses for courses” type problem. There is not one horse (or horse type) that is good for all competitive environments. Cutting quarter horses don’t race with Thoroughbreds, and Thoroughbreds are useless at a rodeo. “Horses for courses” for energy technologies means the best-suited technology can vary by location, by need, by time (e.g of peak grid load), and a host of other factors. In evaluating technologies we have to remember that what is practical in one area may not be practical –or even possible– in other areas. Our argument is that simplistic blanket conclusions about ‘renewables’, biofuels, and the like are not possible. Most ‘alternative’ energy advocates ignore the specific situational characteristics inherent in providing electric power.

In a recent thread discussion, the proposal that long distance HVDC would work to support extensive long distance integration of renewables was advanced. The case of New Zealand’s HVDC Inter Island tie was offered as a concept demonstrating the feasibility. This facility was commissioned in 1965 and has performed well. It connects two islands and is valuable because it allows the north access to the large hydro resources in the south to help meet their peak demand and it provides the south access to the north islands thermal generation when hydro resources are low.  HVDC was justified because of the long distances.

Originally 600 MW, today the line can accommodate 1200 MW. Relative to the size of their system, this is a big tie that approaches only 20% of their peak demand. Before generalizing that greater percentages of grid load can be served long distance through HVDC ties to renewable resources, much further study is required case by case.

Solar power comes in various flavors, and its utility is strongly influenced by insolation. Solar PV might make technical (if not economic) sense in the American Southwest, which has high insolation and summer daytime peak loads from air conditioning demand. But it makes little sense in the UK, which has much lower insolation because of its latitude and weather, and where peak demand is about 6 pm in winter months after the sun has set.

Perhaps it is not so surprising, then, that SunEdison’s UK rooftop solar initiative is not going well.

SunEdison invested £400 million in UK rooftop solar, including ‘zero down” offers, to mine the rich UK subsidy vein it was after. After Osbourne and Cameron announced elimination of future rooftop feed-in-tariffs on grounds they were financially unaffordable, Sun Edison announced on 7 October 2015 that it was exiting the now unprofitable UK. Its stock is down ~70% since that day. It has delayed filing its annual financials citing material accounting weaknesses. SunEdison (based in high insolation California) now carries $11.67 billion in debt on a market cap of ~$650 million. There are serious doubts whether it can avoid bankruptcy. Foolishness has consequences; the New York Times said on March 15, “ If SUNE enters bankruptcy the autopsy will show suicide.”

The idea that the US should become more like Denmark is prominent in some circles. Some claim that Denmark shows that the idea of a world powered by renewables is no fantasy.

Denmark has some of the best wind conditions in the world. They are well positioned to take advantage of the wind generation. Because they were a pioneer hundreds of companies supporting wind are located within the country. Denmark also benefits from being able to export wind power to surrounding countries which makes such high penetration levels possible for an intermittent resource. Denmark also benefits from offsetting Norwegian hydropower.

Denmark should be expected to be much more successful at wind generation than many other countries and their “success” will not be easily emulated. Still Denmark has the highest electricity costs in the EU. Perhaps it should be also be noted that overall the US produces nearly 14 times more wind power than Denmark.

The idea that biofuels are green and carbon neutral really depends on location and fuel.

US E10 ethanol in gasoline has been criticized because it uses a food source, maize (corn). The food impact is overstated by critics, because the 41% of the US corn crop that goes to ethanol production returns 27% distillers grain (yeast protein and carbohydrate enriched, and roughage enhanced), which makes an excellent ruminant feed stock (beef cattle and dairy cows).

Whether corn ethanol is actually ‘carbon neutral’ is hotly disputed. The Renewable Fuels Association (RFA, sort of a Midwest Farm Bureau extension) says of course it is. Greenies like Friends of the Earth (FoE) and Scientific American say of course it isn’t. Who to believe?

Ethanol in Brazil makes imminent sense. The country is vast, and large regions are ideally suited for sugar cane production for ethanol (and rum). By 2020, 4/5 of all Brazil cars will be able to run on gasoline, E10, E85, or pure ethanol. Even though Brazil has vast oil deposits in its offshore Santos and Campos basin subsalts (current estimates are 62Bbbl of TRR, with full production by 2017 at ~4.5mbpd), ethanol still makes practical sense in Brazil. In 2010, BP bought Devon’s Campos subsalt concessions for $7 billion as an oil play. BP has also invested about $1 billion in 3 modern Brazil cane mills/ethanol fermenters fed by about 400 square miles of leased sugarcane fields as an ethanol play.

Not only does ethanol make no sense, neither does the conversion of some units of the DRAX coal station to wood pellets sourced from the US southeast. Three of 6 645 MW units have been converted, at an annual subsidy of £350 million. The EU is investigating whether the UK subsidy proposed to DRAX for a fourth 645MW unit conversion from coal to wood, ~£200 million per year for 15 years inflation indexed, exceeds even its own crazy green subsidy rules.

Rather than being produced from logging waste wood (e.g. slash, crowns) or plantation pine (as DRAX told the UK in order to obtain its green subsidies, and advertises in its FAQs), hundred-year old mixed hardwood Carolina bottomlands are being clear cut to supply Enviva’s pellet mills for DRAX. Greens in both the UK and the US are outraged. Those forests will take at least century to regenerate, and in the mean time DRAX is NOT carbon neutral since this SE US forest carbon sink is being destroyed. Those forests do not care whether their CO2 for photosynthesis came from coal or wood.

Oregon is among the greenest of the US states. One of Oregon’s many green policies is a subsidy for better home weatherization (e.g. insulation, insulated ductwork, double glazed windows), to reduce winter heating CO2 emissions. But the program isn’t working, as at current natural gas prices the efficiency improvements simply are not economic even after state subsidies. They might be economic if homes are electrically heated, but 73% of Oregon’s electricity comes from hydro. The whole program simply does not make practical sense.

We’ve discussed various technologies and approaches employed in specific areas due to specific circumstances. Renewable advocates often illogically suggest that because something has “worked” in one area it will work in others. Just because something works in one place’s circumstances does not mean it will work elsewhere under different circumstances. It’s not just energy production – areas will differ in the extent of their ability (if any) to support various industrial, agricultural, cultural and recreational endeavors. North Dakota should not be expected to match Hawaii’s historical capability to export pineapples. AND Hawaii doesn’t grow a lot of wheat or export a lot of pineapples these days.

Complicating the picture is the stark truth that, just because somebody built something, that doesn’t mean it made any sense to have done so. Not all renewable “achievements” deserve to be imitated even under similar circumstances. While some renewable projects struggle to remain operational and are shown in hindsight to be obviously bad decisions, the operation of others provides benefits even though they too were bad initial decisions. Renewable projects have relatively large up front fixed costs which cannot be recovered by terminating a project. In deciding to keeps a facility going or not, “sunk costs” should be ignored. So an overly costly project that never should have been built can still remain a worthwhile part of an energy portfolio once completed. The fact that such resources are effective in a portfolio under such conditions should not be used to argue for sinking further costs into construction of more such facilities.

Trying to replicate someone’s success without understanding the factors behind that success can be a recipe for disaster. Making goals, targets, and regulations for broad areas based on overgeneralized limited experiences from incomparable areas is very poor public policy. The more energy supply decisions are made based upon considerations tied specifically to local/regional circumstances, the better off we will be.