We need to raise the bar on how we think about the possible worst case scenario for climate change.

The news and twitterati are abuzz with the idea of ‘Hothouse Earth’, based on a new paper published in PNAS [link]:

Trajectories of the Earth System in the Anthropocene

We explore the risk that self-reinforcing feedbacks could push the Earth System toward a planetary threshold that, if crossed, could prevent stabilization of the climate at intermediate temperature rises and cause continued warming on a “Hothouse Earth” pathway even as human emissions are reduced. Crossing the threshold would lead to a much higher global average temperature than any interglacial in the past 1.2 million years and to sea levels significantly higher than at any time in the Holocene. We examine the evidence that such a threshold might exist and where it might be. If the threshold is crossed, the resulting trajectory would likely cause serious disruptions to ecosystems, society, and economies. Col lective human action is required to steer the Earth System away from a potential threshold and stabilize it in a habitable interglacial-like state. Such action entails stewardship of the entire Earth System—biosphere, climate, and societies—and could include decarbonization of the global economy, enhancement of biosphere carbon sinks, behavioral changes, technological innovations, new governance arrangements, and transformed social values.

If you download the paper, be sure to download the Supplementary Information, which contains most of the ‘meat.’

The article has engendered much alarm in the media, typified by the Guardian:  Domino-effect of climate events could move Earth into Hothouse state. “We could end up delivering the Paris agreement and keep to 2C of warming, but then face an ugly surprise if the system starts to slip away,”

Apparently there was some concern about ‘over egging the pudding’, with the following more optimistic articles: Terrified by hothouse Earth?  Don’t despair, do something

There is actually one very good article on this, by Chelsea Harvey at E&E News:

The possibility of these kinds of climate thresholds has already been explored in numerous studies and reports in recent years. In many cases, experts largely agree that these thresholds likely exist — but at exactly what point they’ll be crossed remains highly uncertain. This new paper adds an element of urgency to the issue by suggesting that even 2 C of warming could be enough to send the whole Earth system over the edge.

Another recent study, published in June in Nature Geoscience, took a look at the past few million years of Earth’s climate history to explore the consequences that similar levels of warming have had on the planet before.

“The good news is that warming on the scale of that envisioned by the Paris climate agreements did not appear to trigger runaway feedbacks to a hothouse” during some of these warm periods, Alan Mix, a climate expert at Oregon State University.

“The paper’s supposition that we are close to a tipping point toward a hothouse world will motivate a lot of research to figure out if this is true, and if so, just where those triggers may lie, and at what level of CO2 they would occur,” he said.

My favorite article is from the Onion: Climate Researchers Warn Only Hope For Humanity Now Lies In Possibility They Are Making All Of This Up 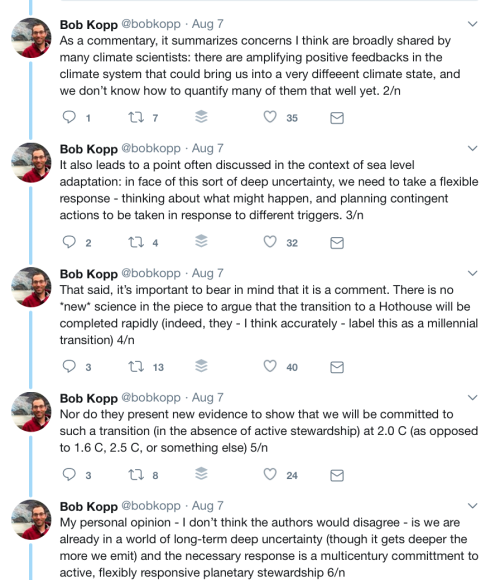 I have frequently written on the need to articulate the worst case scenario:

The falsification approach expounded by Betz  is probably the best framework for addressing this.  However such a ‘worst case’ scenario is formulated, it should be subjected to attempts to falsify the scenario based on our back ground knowledge.

There are two overall approaches that could be followed:

For both, more rigorous articulation of the Steffen et al. scenario is needed.  Note, this scenario is completely independent of climate models.

At the heart of this issue is a point raised by coauthor Rockström in the Guardian article:

Rockström says there are huge gaps in data and knowledge about how one process might amplify another. Contrary to the Gaia theory, which suggests the Earth has a self-righting tendency, he says the feedbacks could push the planet to a more extreme state.

Another key point:  this paper does not adhere to the linear CO2 control knob theory, where you dial up or dial down the temperature based on CO2 concentrations.  This paper considers more of a nonlinear, tipping point approach.

The apparent point of this paper is to spur ‘action’ on changing the world to prevent this hypothetical consequence ~ 1000 years in the future:  decarbonization of the global economy, enhancement of biosphere carbon sinks, behavioral changes, technological innovations, new governance arrangements, and transformed social values.

A paper about climate outcomes on a millennial time scale would seem to be completely irrelevant to any conceivable policy.  Even if our understanding of all of these climate processes were certain (reality check: we are dealing with deep uncertainty with regards to future climate outcomes), geologic and solar wild cards will almost certainly come into play to produce climate surprises.

This paper attempts to spur ‘climate action’ by arguing that the dangerous thresholds of 1.5C, 2.0C articulated by the UNFCCC may be insufficient to prevent this climate domino effect.  Well, assuming you believe the climate model projections, there is pretty much no hope for staying below these dangerous thresholds.  If you believe  Nic Lewis’ estimates of climate sensitivity, then these targets are in reach.  If you believe that the large-scale ocean circulations are dominating climate variability on decadal to millennial time scales, then what we do with respect to CO2 emissions won’t make much difference.

And at the end of the day, we still don’t understand abrupt climate change.

The rational reaction to such deep uncertainty in future climate outcomes is arguably increased resilience and ‘flexibly responsible planetary stewardship.’

A more useful time horizon for policy making is 30 years (~2050) and the end of the 21st century.  Speculations about possible scenarios in ~1000 years are not useful for policy making in a prescriptive sense in context of the precautionary principle (see Is Climate change a ruin problem?)

If the paper wasn’t so heavy on the policy prescriptions, it would be a much more credible contribution.

The contribution of the paper was relatively dismissed by several climate scientists on twitter, saying that there was no new science here.  This is correct in the sense of no new observations or number crunching.  Rather the paper is more in the tradition of a philosophy of science paper, which provides some higher order reflections on evidence.

I actually find such integrative, reflective papers to be of great value to spur critical thinking and analysis.  Yes, technical contributions to the literature are important.  But the biggest deficiency in climate science is how we reason and link evidence about the complex climate system (see my 2011 article Reasoning about climate uncertainty).  Philosophy of science can be a big help here (see my paper Climate uncertainty and risk).

For almost a decade, I have been arguing that we need to articulate the possible worst case scenario for climate change.  Such an articulation would take climate science beyond the restrictions of climate models to understand how the climate system works in terms of interacting feedbacks and also abrupt climate change.  We need to bring more discipline (and creativity) to this interesting and important endeavor.

(i) Is humanity at risk for pushing the system across a planetary threshold and irreversibly down a Hothouse Earth pathway?

(ii) What other pathways might be pos- sible in the complex stability landscape of the Earth System, and what risks might they entail?

(iii) What planetary stewardship strategies are required to maintain the Earth System in a manageable Stabilized Earth state?