On the Decrease of Hot Days in the US

As part of his 2016 testimony to Congress, Dr. John Christy presented this chart:

Figure 1. The average number of 100°F days in the USHCN data set from Christy.

This result evoked some amount of discussion on climate related blogs. After initially reproducing a similar result, I considered some of the blog comments which questioned raw versus adjusted data, station moves and how global records might compare. I examined these issues and the results follow.

The monthly data sets include both raw and adjusted data. The adjusted data includes quality control checks, correction for time of observations (TOBS), and applies the USHCN pairwise homogenization algorithm to correct for shelter changes, station moves and other changes. To adjust the raw daily maximum temperature (TMAX) data, the analysis below adds the corresponding difference between raw and adjusted monthly TMAX data to each raw daily observation. This adjustment is notional. No daily adjusted USHCN TMAX data are available, but the monthly adjustments provide, on average, a best available estimate of adjustment.

The analysis excludes any missing data from means and counts. The analysis excludes complete years of a station missing more than 15 Summer days. To prevent bias from transient stations, the analysis completely excludes stations with more than two consecutive years missing excessive summer data. These selection criteria reduce the total number of stations used, but result in a consistently measured data set.

After selecting stations for consistency, the mean number of days reaching 100°F results in Figure 2(a) below. The raw data(red) differ from the adjusted data(gold). The largest factor of adjustment is thought to be the transition from Stevenson screen shelters to “bee hive” enclosures beginning in 1984. This effect is evident in Figure 2(a) with the difference between raw and adjusted data decreasing after 1984. For both the raw and adjusted data there is a decrease in the frequency of 100°F days from the first half to the last half of the record. The stations meeting the selection criteria are indicated in Figure 2(b). 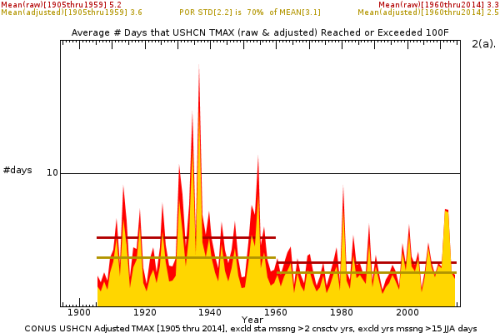 Figure 2. (a) The mean number of days in which TMAX reached or exceeded 100° F decreased from the first half to the second half of the period 1905 through 2014; (b) the stations used and the period of record maximum temperature. 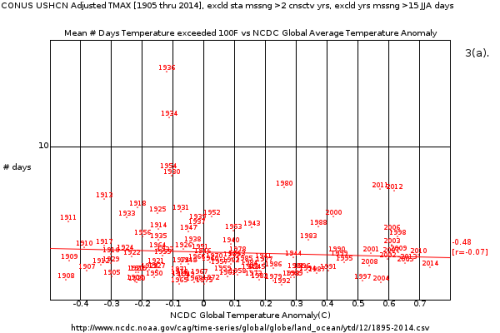 Of course, correlation is not causation and multiple factors can occur simultaneously. It’s worth considering the anticorrelation of hot days with summer precipitation in the context of the conceptual model of a heatwave. 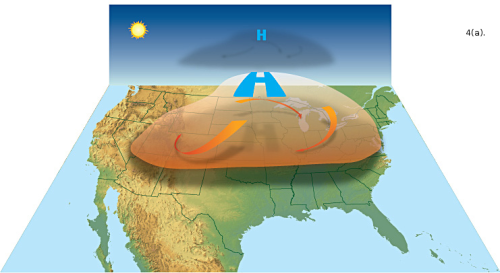 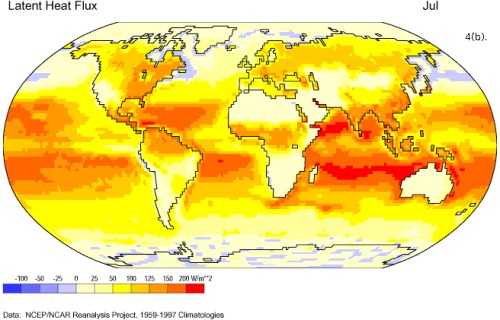 .
Figure 4. (a) Heatwaves are typically induced by strong, large, persistent or recurrent anticyclones during summer (JPL); (b) Average July latent heat flux from the surface over the US averages over 150W/m^2 in places as seen in this NCEP/NCAR Reanalysis(physicalgeography.net).

Heatwaves are typified by the presence of a surface anti-cyclone (high pressure area) as depicted by the educational graphic in Figure 4(a). Anticyclones exhibit subsidence (sinking air) and light winds. The subsidence often results in an inversion which traps heat in the layer between the surface and the subsidence inversion. Subsidence also tends to inhibit the formation of both clouds and precipitation. Figure 4(b) above depicts the mean July latent heat transfer from the surface from reanalysis. Much of the Eastern US experiences average cooling of the surface by latent heat transfer of 125W/m^2 or more. As precipitation tends toward zero because of persistent or recurrent anticyclonic circulation, so too does the cooling of the surface by latent heat tend toward zero as the precipitation supplied soil moisture decreases. The potential for natural variation of precipitation to induce hot days (125W/m^2) is much larger than the potential from doubled CO2 (~3.7W/m^2).

What about the global record of hot days?

Of course, it is of interest as to how hot days varied, not just in the US, but around the globe. Unfortunately, there are many issues with constructing a global record from the GHCN TMAX data. Lack of stations in the early twentieth century, transient stations which reported for only for a few decades, missing data through out, lack of adjustment analysis for many stations, and other issues limit available consistent data. In spite of these factors, a similar analysis of the raw Non-US ( GHCN stations outside the US ) TMAX data appears as Figure 5(a) and 5(b) below.

Figure 5. (a) The mean number of days for consistently reporting stations in the GHCN, outside the US, in which TMAX reached or exceeded 100°F from 1905 through 2014; (b) the NonUS GHCN stations used and the period of record maximum temperature.

The mean number of 100°F days indicates a slight decrease, but the land area covered by consistent measurement is quite limited (on the order of 10%). By examining a briefer and more recent fifty year period ( 1962 through 2011 ), a greater coverage and density of stations meets the selection criteria as in Figures 6(a) and 6(b). There are many regions of missing stations data in the GHCN from 2012 through the present which is the basis of choosing the period end of 2011. 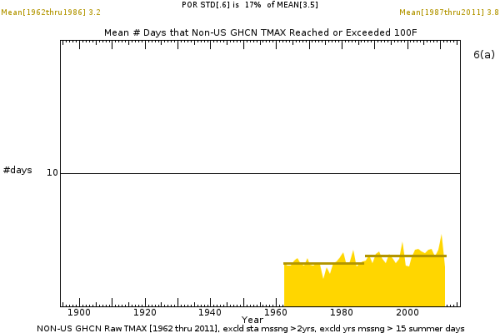 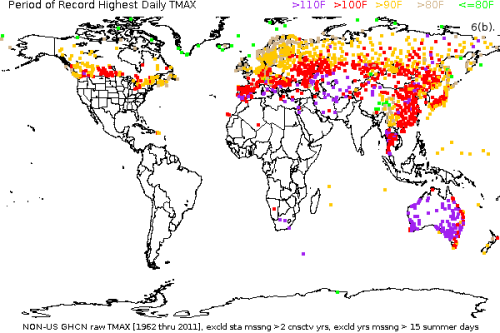 Figure 6. (a) The mean number of days for consistently reporting stations in the GHCN, outside the US, in which TMAX reached or exceeded 100°F from 1962 through 2011; (b) the NonUS GHCN stations used and the period of record maximum temperature.

The land area coverage of stations with consistent data is larger than that of the century scale analysis, but still not global (perhaps 50%). For this period and area, the frequency of 100°F days increased. Such an increase did also occur in the smaller regions (the US and the NonUS measured since 1905) as part of the longer term decrease for those regions. This comparison is depicted by Figures 7(a) and 7(b) below. 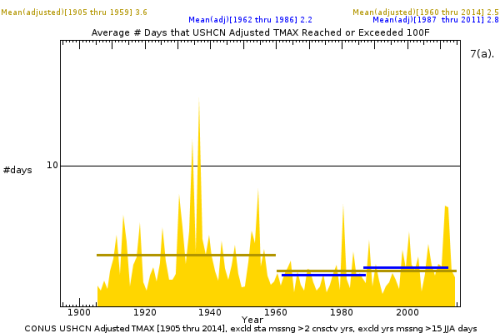 Figure 7. Shorter and longer term changes of 100°F days for both (a) the USHCN adjusted TMAX and (b) the Non-US GHCN raw TMAX data.

Of course, the smaller regions may not represent the global frequency at all. Unfortunately, the lack of TMAX observations limits the ability to assess global hot days.

What doesn’t this analysis mean?

This does not mean that global warming is not occurring. The trend for spatially weighted CONUS annual TMAX data (not just hot days) indicates a positive trend which is roughly consistent with other assessments of the global warming trend of the last century.

This also does not indicate a trend of decreasing hot days. The past variance (standard deviation 70% of the mean occurrence of hot days) is high and could impose a variety of trends.

What does this analysis mean?

Also what this means is that the confidence expressed by the IPCC may be unwarranted when they write that for the next century “Warmer and/or more frequent hot days and nights over most land areas are virtually certain”.

Figure 8  represents the changes from the first half of the record (grey) to the second half of the record (gold) in the mean number of days that US TMAX values fall within a given ten degree temperature band. The largest changes have been an increase in the number of days with maximum temperatures in the 70s and 80s °F, and a decrease in the number of days with maximum temperatures above 90°F. The decrease of hot days in the US appears to be counter-intuitive. Counter-intuitive observations can occur because of faulty assumptions. The assumption that the signal of greenhouse gas forcing has emerged to exceed natural climate variability of hot days in the US is contraindicated by the record of more than a century.

Moderation note: As with all guest posts, please keep your comments civil and relevant.