Natural climate variability during 1880-1950: A response to Shaun Lovejoy

The purpose of this post is to focus attention on the 70-year period 1880-1950 addressed by JC in her first point, which is also where her other four points seem particularly applicable.

The importance of this period is that it contains by far the best data we have about natural variability in the absence of significant variation in CO2.   Before that period we have nice regional data such as Central England Temperature going back to the 17th century, but no satisfactory global data.  After that period the onset of rapidly rising CO2 makes it the devil’s own job to separate the contribution of CO2 from other climate impacts, opening the door to bitter debate as to the proper separation.

At one extreme of the debate, some of the denizens here flatly deny CO2 has any effect and that the recent rise is simply further natural variation.  That extreme gets annoyed at Judy, who to them appears to be on the other side from them.

At the other extreme are those who, when confronted with JC’s point 1 above, would reply “The science shows that most of the warming since 1880 is attributable to GHG.”  They too get annoyed at Judy, whom they lump together with what one might call the absolute denialists, those claiming that CO2 has no effect whatsoever on climate.  Since Judy’s earlier research involved radiative forcing, it would be fair to say that putting her in that camp is unscientifically dismissive.

Yet this reply about “most of the warming” was in fact SL’s exact response to that point when he joined the discussion of JC’s post.

SL cited as his source for “the science” his own Figure 1 from L4: 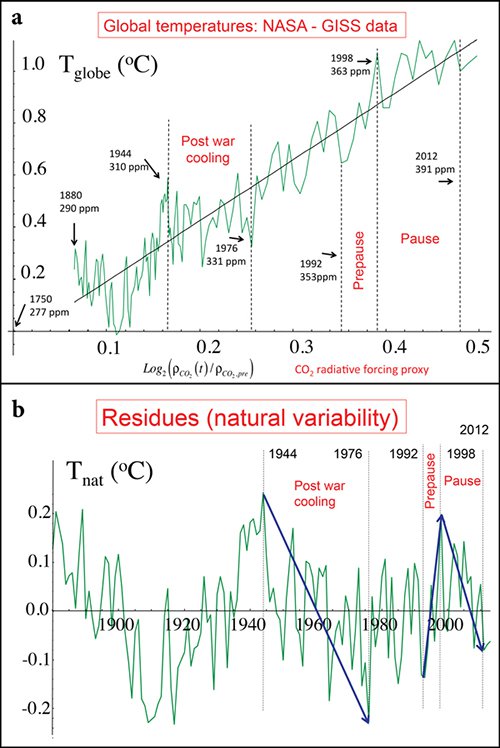 One need be neither a scientist nor a statistician to see that the unexplained variance represented by the residuals in Figure 1(b) prior to 1944 consists of a huge 0.4 °C decline during the 33 years 1878-1911 followed by an equally huge rise during the 33 years 1911-1944, seemingly completing one cycle of a 66-year oscillation. Note that this is not the temperature itself but the presumed natural
fluctuation after taking into account the expected contribution of CO2, i.e. the explained variance represented by the black line in Figure 1(a).

If it were truly an oscillation one would expect an equal decline during
1944-1977.  And indeed there it is, quite clearly, in Figure 1(b). Labeled “Post war cooling”, but what’s in a name?

But after that, the putative “oscillation” seems to die down.   The 14
year period 1998-2012 labeled “pause” in 1(b) is much too short to be
part of a 66-year oscillation.  And if the pause is attributed to the
22-year-period polarity reversal of the heliomagnetosphere, based on its
relevance to climate as has been suggested from time to time starting
with Edward Ney in 1959, then it would be more appropriate to take it to be even
shorter, namely the 11 years 2001-2012, with the freak peak of 1998
taken to be an unrelated outlier, consistent with the following choice
of trend lines 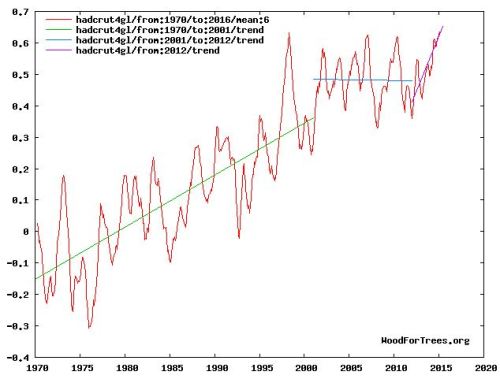 But that, along with the papers by Santer et al 2008 and more recently
Karl et al 2015 purporting to prove that the pause is statistically
indistinguishable from no pause based on a questionable assumption that
all else is noise, is a digression better dealt with elsewhere.

On the other hand Figure 1(b) shows an overall decrease from 1880 to 1950.  So a more all-round-acceptable version of JC’s first point might be “natural fluctuations prior to 1977 have a peak-to-peak amplitude on the order of 40% of the total increase since 1880.”  It would then be conceivable that, whatever the source of those natural fluctuations, they may have simply increased in amplitude since then.

Now what about SL’s “most of the warming since 1880 is attributable to
GHG.”  Can this be defended against point 1 thus restated?

Arguably these short-term fluctuations have little bearing on either climate in earlier centuries or on multidecadal climate in 2100.  Here’s my argument for that.

I don’t know about other people, but my impression of (a) is “no”. Furthermore I have great difficulty believing “yes” to (b), at least with current modeling technology.

So on that basis there should be little loss in either insights into past climate or long-term predictive power resulting from applying a 60-year moving average (running mean, boxcar) filter to recent climate data.

Combining this with SL’s very neat technique of plotting CO2 linearly with forcing rather than with quantity of CO2 yields the following MATLAB plot. 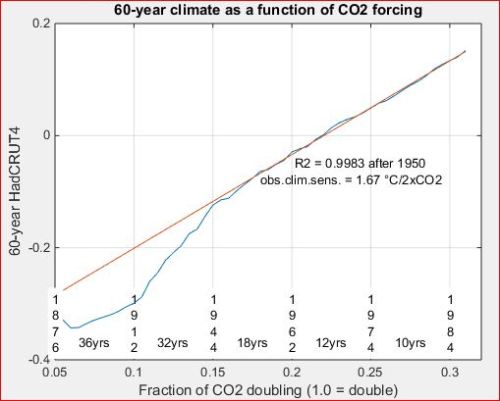 What shocked me when I first saw this was not so much the very linear
plot on the right, which I’d been kind of expecting, but the sharpness
of the transition into linearity during 1944-1950.   If you take the
goodness of fit to Arrhenius’s logarithmic law after 1950 as a measure
of the goodness to expect in general, with its astonishing R2 of 99.83%,
then climate before 1950 very badly fails that law!

Based on this plot I would judge Judy’s first point as borne out by that
failure to fit.  And that’s even after removing 60-year-period “AMO”
and faster oscillations with the 60-year boxcar filter.

Apparently there is more to the period before 1950 than meets the eye.
Solar variability during the first half of the 20th century is even
slower than the AMO and therefore could well be a contributor.  With CO2
rising so slowly in that period, there could also be other slow-moving
contributors able to overwhelm CO2’s contribution before it kicked into
high gear.  This surely bears further investigation!

But it would also appear that SL’s claim is just as strongly borne out,
provided he limits it to past 1950.

And this is to be expected based on the HITRAN table of CO2 absorption line.  Lines above any given level of strength increase in number by about 60-80 with each halving of strength.    Hence each doubling of CO2 brings roughly the same number of absorption lines into the role of fresh absorbers of OLR, with the stronger lines being retired to the tropopause where they lose most of their influence.  Although Arrhenius did not know this, it provides further support for his empirically determined logarithmic law of dependence of radiative forcing on
atmospheric CO2 level.

I submit this as support for JC’s fifth point, that SL has been a tad unscientific in simply claiming that “The science shows that most of the warming since 1880 is attributable to GHG.”   Most of the warming since 1950, certainly, but to ignore that Judy limited her first point to the period prior to 1950 is to be unscientifically dismissive.  (I would have said even “snarky” but that’s not a scientific judgment.)

Note that I’ve labeled the slope of the line, 1.67 °C/2xCO2, as “observed climate sensitivity”.   This is considerably lower than Equilibrium Climate Sensitivity, ECS, due to the thermal inertia of the Oceanic Mixed Layer, OML.  It is also different from Transient Climate Response, TCR, which as the response to a steady rise in CO2 of 1%/yr over 70 years, is more like what the rise between now and 2095 will look like.  SL’s unqualified casual reference to “climate sensitivity”
completely overlooks these hugely significant distinctions.

Ironically the left of this plot should appeal more to the political right, and vice versa.  As they move to their correct sides, perhaps they could pause for a beer and a chat as they pass by.

All relevant MATLAB code and .csv data are freely downloadable from this folder.  Offers to translate it to any of Excel, R, Python, Java, C, etc. gratefully accepted.  I’d be happy to help with any unclear points, though not to do the whole thing alone.  Feel free to ask about the technical details in the comments section below.

JC comment:  As with all guest posts, please keep comments civil and relevant.  I will tweet this and flag Shaun Lovejoy, hopefully he will stop by to discuss.

362 responses to “Natural climate variability during 1880-1950: A response to Shaun Lovejoy”