JC at the National Press Club

I have just returned from my engagement at the National Press Club, sponsored by the Marshall Institute Roundtable.

The talk was recorded, it should be available online in a few days.

The pdf for my talk is here marshall.   Much of the material from my talk comes from my recent congressional testimony:

Here are excerpts from talk, focusing on overview/integration slides and material that I haven’t previously presented.

President Obama said in his state of the Union Address: “We don’t have time for a meeting of the Flat Earth Society.” President Obama seems to view climate change as a ‘tame problem’, where we have clearly understand the problem and have identified the appropriate solutions.

I view the climate change problem very differently, as a ‘wicked mess’. A wicked problem is complex with dimensions that are difficult to define and changing with time. A mess is characterized by the complexity of interrelated issues, with suboptimal solutions that create additional problems.

My concern is that the climate change problem and its solution have been vastly oversimplified, and that the interface between climate science and policy has become badly broken.

So how did we end up mistaking a wicked mess for a tame problem?   The main problem has been putting the policy cart in front of the scientific horse.   The 1992 UNFCCC treaty was signed before the balance of evidence suggested even a discernible human influence on global climate, which was assessed by the IPCC Second Assessment Report in 1995. The 1997 Kyoto Protocol was implemented before we had any confidence that most of the warming was caused by humans.

The 4th and 5th IPCC Assessment Reports have provided increasingly confident assessments that humans have caused most of the warming. So was the 1992 Treaty somehow prescient of the science? 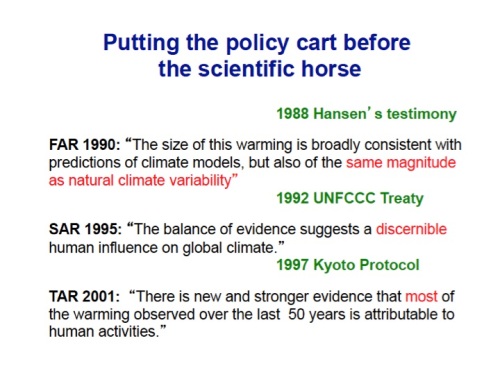 Well, here is what has happened. Have you heard the story about the drunk searching for his lost keys under a street light, since that is the only place where he can see anything? Well something similar has been happening with climate science. You find what you shine a light on. Motivated by the UNFCCC and IPCC and government funding, climate scientists have focused primarily on greenhouse gases and to a lesser extent other anthropogenic factors. Other factors important for understanding climate variability have been relatively neglected, I have highlighted long-term ocean oscillations and solar indirect effects, since I think that these are potentially very important on decadal to century timescales.

[See the main presentation for the science part]

This leads us to ask the question: What climate do we want? Do we want to return to the climate of the 1930’s? Or the 1950’s? Or the 1970’s? Or would a warmer climate be more desirable? The answer to this question may vary by region: Canada, Siberia and Northern China might prefer a warmer climate. My point is that there is no simple answer to this question.   Any change or extreme event, be it natural or human caused, can be disruptive.

When talking about climate change and how we should respond, much of the debate relates to a conflict of values. Sustainability is the value that is driving the UN climate policies that are trying to mitigate damage by reducing CO2 emissions. These policies are in stark conflict with survivability issues in the developing world, where there are severe challenges to meeting basic needs and where there idea of clean green energy is something other than burning dung inside their dwelling for cooking and heating. While the UN policies also include adaptation, which is targeted at increasing reslience, funds for mitigation are in direct competition with funds for resilience. And finally we have thrivability, which is about people wanting not only to make money and support economic development, but also to strive for greatness and transform the infrastructure for society. The goals of thrivability are also in conflict with sustainability, with its emphasis on austerity and obligations and its costs that conflict with economic development goals.

So why am I, a climate scientist, talking about values? Well, I am trying to figure out how climate science can better support decision making on these issues. The path that we have been on, the sustainable one, is vested in the IPCC with its reliance on global climate models, determinations of climate sensitivity to CO2 and rationalizing emissions stabilization targets. In my opinion, we reached the point of diminishing returns from this path about a decade ago. Particularly with regards to global climate models, the hope was that these could be used for projections of regional climate change; this hope has not been realized, and is arguably unrealizable from the current development path for climate models.

There is untapped capability for climate science to have a big impact in the other 3 columns. Consider survivability. Tactical adaptation is a phrase that I’ve coined to describe the use of weather/climate forecasts on timescales of weeks to season to save lives and property from extreme weather and to support cropping and agriculture decisions.

In the resilience and thrivability columns, in addition to tactical adaptation, there is also a need for more sophisticated analyses of the statistics of extreme events and identification of possible worst case scenarios, which require much longer data records.

All of the academic research and most of the government funding goes to science in the sustainability column. Most of the effort in the other columns comes from the private sector, NGOs and development banks. Is this a good use of government funding and the intellectual horsepower of academic scientists? In my opinion, it is NOT. 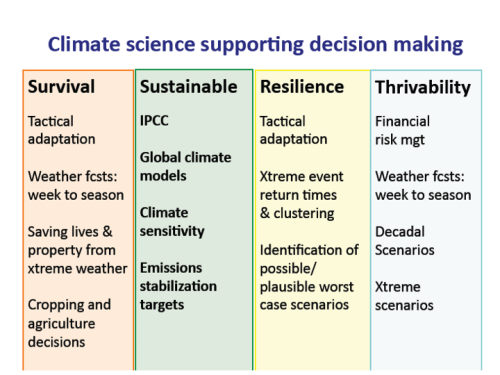 The final points I want to make is related to the different decision-analytic framework associated with each of these columns. In the sustainability column, related to carbon mitigation, we are faced with conditions of deep uncertainty. The precautionary principle has guided policy making, although no regrets and robust decision making are also decision making strategies for conditions of deep uncertainty. The sustainable column frames both the problem and the solution as irreducibly global.

In the other columns, the problems and solutions are local to regional. Some of these problems can be carved out as tame problems, where everyone can agree on both the problem and the solution. Particularly for tactical adaptation, you can make use of probability forecasts on timescales of days to seasons, and ensemble forecast systems can be used for extreme event scenarios. Decadal scenarios can support infrastructure decisions.

My summary point is that framing the problems in different ways supports the identification of more tractable problems and solutions. 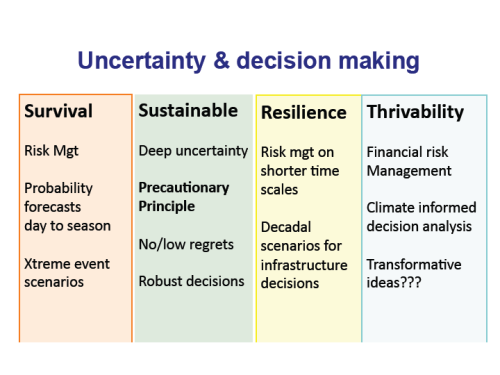 Thinking about the problems in new ways, and trying to accommodate different values, can lead to solutions that have greater political viability. For example, at the intersection of sustainability and resilience, you can identify robust strategies that have multiple benefits with little downside.

The challenges of climate change related to survivability can benefit from thrivability thinking, particularly some strategies suggested by anti-fragility strategies, whereby you learn and grow from adversity. Some of these strategies include economic development, reducing the downside from volatility, developing a range of options, tinkering with small experiments, and developing and testing transformative ideas. 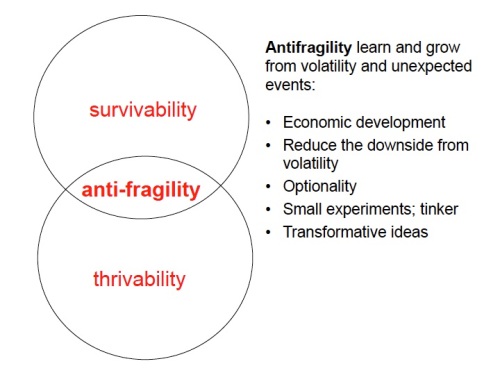 In summary I hope I have provoked you into thinking about the climate problem as a very complex one, that can be characterized as a wicked mess.

JC note:  For background on sustainability-resilience-thrivability, see my previous posts:

This was a really nice event, and I greatly appreciate the effort that the Marshall Institute put into organizing this.  There were about 80 people in the audience, which included people from the federal government (US Govt Accountability Office, U.S. Treasury Dept, congressional staffers, US Dept of Energy Federal Reserve, U.S. Dept of State), World Bank,  industry, the media, a few from universities, and think tank/advocacy groups.  I definitely intend to follow up on contacts with several of these individuals.

The questions and discussion were quite good, coming from a broad spectrum of perspectives.  Marc Morano has written up a summary that includes some of the discussion [link], although I’m a bit puzzled by the headline.

This whole issue is heating up, with the forthcoming UN meeting in New York.

This entry was posted in Adaptation, Attribution, Policy. Bookmark the permalink.

473 responses to “JC at the National Press Club”