The scientific enterprise is not immune from the perils of obesity.  – Mike Kelly

BishopHill points to an essay in Science about U.S. federal funding for scientific research, entitled Am I Wrong? by Bruce Alberts.  The relevant excerpts:

Now, on top of that comes a mindless budget “sequester” that will make the situation considerably worse, causing the U.S. National Science Foundation to announce last week that it may award 1000 fewer research grants in 2013 than it did in 2012.

I was fortunate to become a scientist at a time when the U.S. system of research was flourishing, thanks to visionary national leadership. It is no accident that the U.S. economy and global status subsequently flourished, or that the success was built in partnership with many of the best minds from other nations. The brilliance of U.S. science and engineering enabled its universities to attract a very large number of the most energetic and talented students from around the globe. A major fraction of these young scientists and engineers decided to remain here after their training, where they have made enormous contributions not only as academic leaders but also as leaders in industry and government.  It is hard to imagine a Silicon Valley, or any of the other U.S. centers of innovation, prospering without such talented immigrants.

Other nations have been increasing their research intensity at an impressive pace. With the latest cuts created by the shortsighted political gridlock in Washington. DC, are we headed to a future where the world’s most talented young scientists and engineers no longer want to pursue careers in the United States? If so, in what nation will the next Silicon Valley be developed? The declining opportunities for research funding have made survival for some of the most able researchers resemble a lottery—or perhaps Russian roulette is a better analogy. The effect on the U.S. research system seems devastating. Am I wrong? To what extent do you think the current grant-funding environment is undermining the intellectual environment and creativity in your institution?

In response to his “Am I wrong?” question, there are some interesting comments.  Mike Kelly of Oxburgh Panel fame writes the following comment:

Some points that you have not considered, which blunt the strength of your argument: The scientific enterprise is not immune from the peril of obesity. Periodic downturns in funding provide an opportunity to weed out the less than effective. Even you I think would agree that much of the ‘science around climate change’ is second rate – repeatedly drawing unwarranted conclusions from incomplete data and extrapolating from simulations of model climates that have not been robustly verified in terms than an engineer would regard as essential as the basis for future action. I could go round other subjects, you will have your own, where a bit belt-tightening would be positively beneficial. If much of the second-rate were squeezed out, US science would be in a better place. During Mrs Thatcher’s period as Prime Minister, UK science was squeezed hard, and I would argue came out of it better, leaner and fitter. Like dieting, it is not a healthy permanent state, but its absence is definitely unhealthy. In times of plenty, one ‘lets a thousand flowers bloom’ and in tough times, one redoubles the effort to exploit the stock of recently acquired new knowledge, rather than generate more new knowledge and leave it unexploited. This makes sound economic sense. It is the point I made in a lecture (sponsored by Intel) to the Irish Academy of Engineering in Dublin in December 2011. Science should not be privileged above all else in the nation’s finances: a little privilege only. When everyone else is feeling the pinch, and I mean those who are hungry and in fuel poverty, it ill behoves the ‘rich man in his laboratory’ being immune. If support for the arts is being cut, then the ‘cultural’ science of ‘innate curiosity’ should take a commensurate cut, and ‘science with a consideration of use’ should be privileged in what is left to spend. The US is just ending a period of artificially high federal R&D spending because of the stimulus package. Now is the time to reset the national balance between R&D and genuine entrepreneurship. You must be aware that there is not a one-to-one reciprocal relationship between science spending and social prosperity, and it is a dangerous myth to rely on or perpetuate. There has been a letter in The Times (of London) in the last week special-pleading for science. If the signatories had been industrialists rather than the scientists themselves, the case would have been more appealing and convincing.

There is a fundamental tension in U.S. science policy and in university academic communities between curiosity driven discovery research versus ‘use-inspired’ research. The most famous example of ‘use-inspired’ research is the development of the atomic bomb; it is illuminating in 2013 to read Vannevar Bush’s 1945 essay As We May Think.

Vannevar Bush’s 1945 report to President Roosevelt Science, the Endless Frontier led to the development of the National Science Foundation.  Excerpts:

Therefore I recommend that a new agency for these purposes be established. Such an agency should be composed of persons of broad interest and experience, having an understanding of the peculiarities of scientific research and scientific education. It should have stability of funds so that long-range programs may be undertaken. It should recognize that freedom of inquiry must be preserved and should leave internal control of policy, personnel, and the method and scope of research to the institutions in which it is carried on.

A more recent perspective on U.S. science policy is the 2007 NRC report Rising Above the Gathering Storm.  Excerpts:

This report emphasizes the need for world-class science and engineering—not simply as an end in itself but as the principal means of creating new jobs for our citizenry as a whole as it seeks to prosper in the global marketplace of the 21st century.

Although the US economy is doing well today, current trends in each of those criteria indicate that the United States may not fare as well in the future without government intervention. This nation must prepare with great urgency to preserve its strategic and economic security. Because other nations have, and probably will continue to have, the competitive advantage of a low wage structure, the United States must compete by optimizing its knowledge-based resources, particularly in science and technology, and by sustaining the most fertile environment for new and revitalized industries and the well-paying jobs they bring. We have already seen that capital, factories, and laboratories readily move wherever they are thought to have the greatest promise of return to investors.

What I particularly want to highlight here is text from Box 3.1 on p 69:

The writers of this report, like many others, faced a semantic question in the discussions of different kinds of research. Basic research, presumably pursued for the sake of fundamental understanding but without thought of use, generally is distinguished from applied research, which is pursued to convert basic understanding into practical use. This view, called the “linear model” is shown here:

In his 1997 book, Pasteur’s Quadrant, Donald Stokes responded to that complexity with a more nuanced classification that describes research according to intention. He distinguishes four types:

In Stokes’s argument, research is better depicted as a box than as a line: 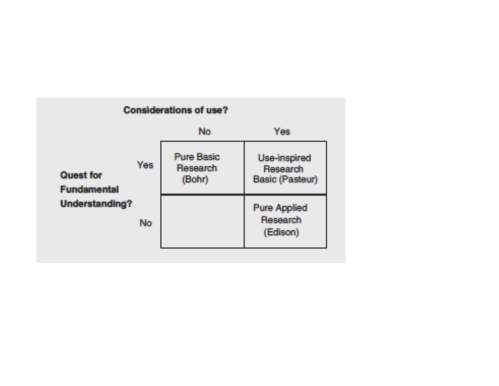 In contrast to the basic–applied dichotomy, Stokes’s taxonomy explicitly recognizes research that is simultaneously inspired by a use but that also seeks fundamental knowledge, which he calls “Pasteur’s Quadrant.”

For some further context and a different perspective, Roger Pielke Jr has published a provocative paper entitled Basic Research as a Political Symbol, and discusses the economic arguments  for ‘basic research’ versus the actual evidence.

Taxonomy of impacts.  There is a substantial amount of research funding flowing into the impacts of anthropogenic climate change on public health, ecosystems, agriculture, happiness, obesity and a whole host of topics.  Are we able to realize the potential value of such studies at this time given the meta-uncertainties surrounding attribution analyses and deficiencies in climate models?

Civil servants versus university researchers.  Government labs that conduct climate research include  the NOAA and NASA labs, and also the NSF funded NCAR.  A problem with civil servants doing research is that a fixed cadre of scientists with particular areas of expertise can result in  ‘stiff’ organizations that lack the flexibility to move into new areas of need and opportunity.  The end result can be a mismatch between strategic plans and institutional capabilities. University research tends to be much more nimble, and university scientists are effectively encouraged by the ‘system’ to move into new research areas by competing for research funds and other professional rewards. Given the mission needs of these agencies in terms applications, what is the appropriate balance for federal funding between civil servant versus university researchers?

Climate model production runs for the IPCC.  The development of large Earth System Climate models and the running of many long simulations for the IPCC takes up a huge amount of resources not only in overall $$ but also in researcher time.  Have we reached the point of diminishing returns on continued large expenditures on such efforts?  Are we learning much at this point from the climate models about how the atmosphere and ocean actually work?  Or is the main outcome to feed the taxonomy of impacts research?  Is the current path of developing higher resolution earth system models going to result in the desired outcome of skill on the regional and decadal time scales?

Basic research.  Much of research funding in climate science supports the large infrastructure of observing systems and climate models, and also personnel at the federal labs.  In spite of the ‘consensus’, there is substantial need for fundamental research particularly related to climate as a complex dynamical system, the physics of climate influences, physics and chemistry of paleo proxies, inference methods, and computational methods.   Should more of the funding and research effort be directed to the basic research needs?

Applied research.  The ‘use-inspired’ climate research has mainly been inspired by the policy makers’ desire to reduce uncertainty about the 21st century impacts of adding more greenhouse gases.  While knowledge is growing, uncertainty is increasing as the dimensionality of the problem increases.  A reorientation is underway for applied climate research towards adaptive management of renewable energy generation, mitigating the impacts of disasters, managing water resources, etc. However, these applications require ‘use-inspired’ basic research.   NSF is poised to make a huge impact in this area with its SEES program, which requires that proposals include massively interdisciplinary collaborations and partnerships with decision makers. What is the optimal involvement of the private sector versus federal funding in applied climate research?

JC summary: While I make no attempt to predict the future of federal science funding, my decision making under uncertainty research suggests that we need to consider scenarios of substantial and prolonged budget cuts.  The budget cuts should motivate a discussion on reordering priorities and how to get better bang per buck for federal research dollars.  I think the climate research enterprise is overdue for such reflection.  A key issue is balance among pure basic research, use-inspired basic research, and pure applied research, and how federal funding can be best allocated in this overall balance.  We have a problem when too much funding goes to applied research with no obvious use.

Moderation note:  I would like to treat this as a technical thread, please keep your comments on topic.

This entry was posted in Policy. Bookmark the permalink.

178 responses to “Obesity (?) of the U.S. scientific research enterprise”