On March 8, 2013, mainstream media around the world carried headlines trumpeting a new study in Science, the gist typified by NBC News:

Warming fastest since dawn of civilization

Except that is not what the paper was about.

A Reconstruction of Regional and Global Temperature for the Past 11,300 Years

Abstract. Surface temperature reconstructions of the past 1500 years suggest that recent warming is unprecedented in that time. Here we provide a broader perspective by reconstructing regional and global temperature anomalies for the past 11,300 years from 73 globally distributed records. Early Holocene (10,000 to 5000 years ago) warmth is followed by ~0.7°C cooling through the middle to late Holocene (<5000 years ago), culminating in the coolest temperatures of the Holocene during the Little Ice Age, about 200 years ago. This cooling is largely associated with ~2°C change in the North Atlantic. Current global temperatures of the past decade have not yet exceeded peak interglacial values but are warmer than during ~75% of the Holocene temperature history. Intergovernmental Panel on Climate Change model projections for 2100 exceed the full distribution of Holocene temperature under all plausible greenhouse gas emission scenarios.

The paper is published in Science, link to abstract [here].

The paper contains a comparison in Figure 1B to a version of the TAR hockey stick chart in which the Medieval Warm Period (MWP) disappeared, and ‘Mike’s Nature trick’ was used to ‘hide the [recent proxy] decline’ by pasting in thermometer temperatures. The paper found good agreement of their reconstruction with Mann et al.’s previous reconstructions:  “indistiguishable within uncertainty”.

It is  evident from the paper’s abstract that temperatures are not yet back to the estimated Holocene peak, let alone above it as Figure 1B depicts. This suggests a significant overall temperature calibration issue.

The MWP has progressively ‘disappeared’ over the course of  the IPCC reports. FAR and SAR showed it to have been much warmer than the present—and nothing to do with CO2. By TAR the MWP was gone, leading to the hockey stick controversy and climategate.

While the MWP did not completely disappear in this new paper, it turned into a <0.1°C blip colder than 1961- 1990. This is quite curious. The MWP was not a blip for the entire northern hemisphere, as illustrated by this figure adapted from a 2010 paper by Ljungvist.

A reference list compiled by CO2Science shows that there are at least 96 proxy studies of Europe, North America, South America, Asia, and Aus/NZ with quantitative estimates of MWP temperatures, plus 109 more with qualitative estimates, and an additional 116 providing evidence that it was a significant, centuries long event that came and went fairly suddenly.

How has the MWP almost disappeared again, just in time to perhaps go missing in IPCC AR5? Science’ supplemental information says the average resolution of the 73 paleoclimate series is 160 years, and the median is 120. The proxy selection was deliberately weighted toward ‘low frequency’ resolution, since the entire Holocene was being assessed. Figure S18c  (below) shows there is no statistically valid resolution to the combined proxy set for anything less than 300-year periods.  [“Gain” was defined as the ratio of output variance to input white noise in simulations ‘stressing’ combined proxy statistical reliability. In other words, for periods less than three hundred years, white noise in is white noise out (no matter whether the Monte Carlo sampling interval is 20 or 120 years) while for periods over 2000 years the output is about 90% ‘valid’ signal.] The paper itself said, “…our temperature stack does not fully resolve variability at periods shorter than 2000 years…” 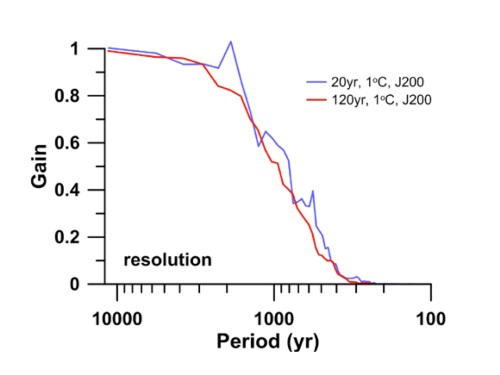 Evaluate a 300-year MWP using methods lacking 300 year resolution and voila! The MWP turns into a blip diminished by the colder periods on each side.

As do any other ‘sudden’ temperature changes occurring over mere century intervals, of which there were plenty on the order of  ±1°C in the actual proxies. The 20 proxies with the strongest Holocene peak signal plotted raw from the SI data file show this quite nicely. 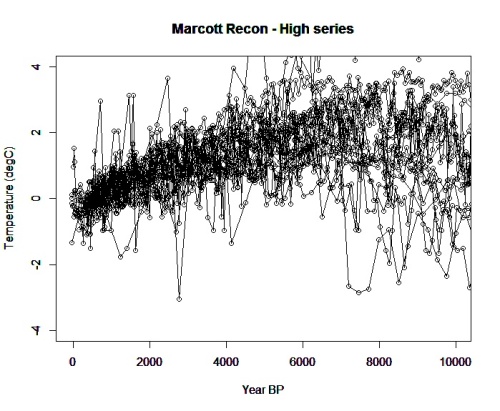 The misinformation highway took the paper’s figure S3 (below) as a spaghetti chart hockey stick of the proxy temperatures. It is not. It shows 1000 Monte Carlo simulations of the 73 data sets, perturbed by inserting random temperature and age calibration errors to establish the blue statistical band in Figure 1B. S3 doesn’t say the last century’s temperature has risen above the Holocene peak. It only says uncertainty about the combined recent paleotemperature has risen. Which must be true if the median resolution is 120 years.

There were certainly ‘sudden’ temperature rises in the MWP charts above as ‘rapid’ as the 20th century (since there has been no rise yet at all in the 21st). Yet MSM headlines focused on the ‘fastest ever’ change. As the most telling example, Marcott’s NPR interview headline was Past Century’s Global Temperature Change is Fastest on Record :

But Marcott says the record shows just how unusual our current warming is. “It’s really the rates of change here that’s amazing and atypical,” he says. Essentially, it’s warming up superfast.

Marcott neglected to tell NPR his methodology did not recognize ‘fast’ century changes at all–until recent thermometer records were spliced onto the 73 paleosites.

And so the next CAGW hockey stick game begins. Possibly with a pass of the puck to Canadian Steve McIntyre.

JC comment:  This post was emailed to me, unsolicited.  I did some editing and checking (I have read the main article but not the supplementary material).   I have not personally spent much time on this paper, but I think it is a paper that should be discussed, given the hypberbolic press coverage.

Andy Revkin has a post on the paper, with extensive quotes from Mann, Rohde, and Alley, worth reading.

Hank at suyts has a post on the paper, where he downloaded the data made available by the authors and  analyzed it.  This post is worth reading also.

There doesn’t seem to be anything really new here in terms of our understanding of the Holocene.  Mike’s Nature trick seems to be now a standard practice in paleo reconstructions.  I personally don’t see how this analysis says anything convincing about climate variability on the time scale of a century.