Roger Pielke Sr has a fascinating, even mind-boggling, post that draws from an article by Paul Voosen in Greenwire entitled “Provoked scientists try to explain lag in global warming.”

Update:  Paul Voosen has provided a [link] to the article.

The Greenwire article is unfortunately behind paywall, but read the extended excerpts at Pielke’s blog.  Here I excerpt a few excerpts from Pielke Sr’s blog, with my comments.

There are some interesting quotes from climate scientists in this article that highlight a large degree of uncertainty with respect to the climate system, and the human role in it, even among scientists closely involved with the IPCC reports.  The long article focuses on the question

‘Why, despite steadily accumulating greenhouse gases, did the rise of the planet’s temperature stall for the past decade?”

The same year as the Niger balloon campaign, NASA had launched a laser-equipped satellite aimed at observing aerosols among the clouds. Vernier and his peers suspected, with enough algorithmic ingenuity, that they could get the laser, CALIPSO, to speak clearly about the stratosphere. The avalanche of data streaming out of the satellite was chaotic — too noisy for Barnes’ taste, when he took a look — but several years on, Vernier had gotten a hold of it. He had found an answer.

Mostly, the aerosols didn’t seem to be China’s fault.

The hiatus [in warming] was not unexpected. Variability in the climate can suppress rising temperatures temporarily, though before this decade scientists were uncertain how long such pauses could last. In any case, one decade is not long enough to say anything about human effects on climate; as one forthcoming paper lays out, 17 years is required

JC question for Kevin Trenberth:  Please remind me of when you first thought there would be a hiatus in the warming.

Trenberth questions whether the Argo measurements are mature enough to tell as definite a story as Hansen lays out. He has seen many discrepancies among analyses of the data, and there are still “issues of missing and erroneous data and calibration,” he said. The Argo floats are valuable, he added, but “they’re not there yet.”

“What’s really been exciting to me about this last 10-year period is that it has made people think about decadal variability much more carefully than they probably have before,” said Susan Solomon, an atmospheric chemist and former lead author of the United Nations’ climate change report, during a recent visit to MIT. “And that’s all good. There is no silver bullet. In this case, it’s four pieces or five pieces of silver buckshot.”

JC message to Susan Solomon:  maybe you should have been listening to what the skeptics have been saying for the last several decades.

These revelations are prompting the science’s biggest names to change their views.

Indeed, the most important outcome from the energy hunt may be that researchers are chronically underestimating air pollution’s reflective effect.

“Less efficient mixing, other things being equal, would mean that there is less warming ‘in the pipeline,’” Hansen said. “But it also implies that the negative aerosol forcing is probably larger than most models assumed. So the Faustian aerosol bargain is probably more of a problem than had been assumed.”

JC comment:  Well somebody had to finally say this, thank you John Daniel.

For a decade, that’s exactly what happened. Skeptics made exaggerated claims about “global cooling,” pointing to 1998. (For one representative example, two years ago columnist George Will referred to 1998 as warming’s “apogee.”) Scientists had to play defense, said Ben Santer, a climate modeler at Lawrence Livermore National Laboratory.

JC comment:  Too bad this didn’t prompt Santer and others to wonder how much further along we would all be in understanding this if they had paid some attention to the skeptics.

Climate models failed to reflect the sun’s cyclical influence on the climate and “that has led to a sense that the sun isn’t a player,” Lean said. “And that they have to absolutely prove that it’s not a player.”

Recently, the satellite group measuring the energy imbalance has revised its figure, which now sits at 0.6 watts, matching Hansen’s estimate, according to Graeme Stephens, the head of NASA’s Cloudsat mission. It suggests there isn’t a missing energy. Trenberth disagrees with this analysis, and it’s likely to be a question of ongoing debate.

Quotes from the end of the article:

“….many of the scientists sorting out the warming hiatus disagree with one another – in a chummy, scholarly way. Judith Lean, the solar scientist, finds Kaufmann’s work unpersuasive and unnecessarily critical of China. Kaufmann finds Solomon’s stratosphere studies lacking in evidence. Hansen and Trenberth can’t agree on a budget.

It seems staggering, then, that in a few years’ time a new consensus will form for the next U.N. climate change report. But it will, and lurking beneath it will remain, as always, the churning theories and rivalries, the questions, the grist of scientific life.

So, in the end, can anyone say explicitly what caused the warming hiatus?

JC summary:  Well thank you IPCC authors for letting us know what is really behind that “very likely” assessment of attribution 20th century warming.   A lot of overbloated over confidence that cannot survive a few years of cooling.  The light bulbs seem to be just turning on in your heads over the last two years.  Think about all the wasted energy fighting the “deniers” when they could have been listening, trying to understand their arguments, and making progress to increase our understanding of the causes of climate variability and change.

As the author of the Greenwire story, I have to note that it is publicly
available. You can find it here:

You also do it a disservice by stripping out the quotes from their
proper place in the narrative. (Granted, Pielke did this first.) I’d
appreciate restoring some context to these quotes, as I don’t see the
overall thrust of my article supporting the tone of the context-free
quotes.

JC comment:  When I prepared this post, I looked pretty hard to find an online version, couldn’t find one so I went with what Pielke posted.  At this point, I don’t have time to redo the post.  In terms of the points that I have been making re attribution, Pielke’s selection is relevant.  I encourage you to read Voosen’s article, it is very good, and with a somewhat different overall narrative than what Pielke provided. 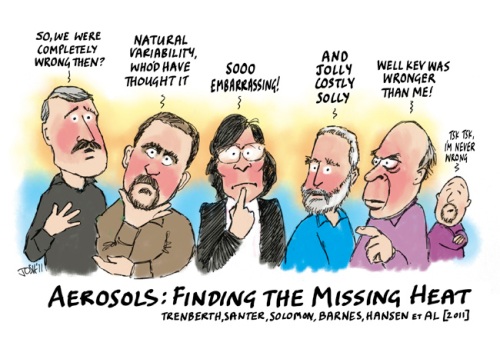