This is the second of a two-part posting based on a presentation prepared for the American Chemical Society’s National Meeting in March 2020. The meeting was cancelled, but the key points in that presentation (plus a couple of added examples based on new publications of relevant research) are in these two posts.

The first example in this part on the application of mass spectrometry to understanding recent climate and weather will look at a method used to obtain hourly to daily resolution short term weather events in the near past. There are a variety of ways of reconstructing past climate changes, but most of them do not have sufficient time resolution to identify short term weather events, such as extreme storms or heat or cold periods (“weather-timescale extreme events (WEEs …)”]). Yet the frequency and impact of such events could help developing better knowledge of past climate and its influencers.

A new study analyzed a marine bivalve in the South China Sea elemental ratios by NanoSIMS (Nano Secondary Ion Mass Spectrometry) to obtain daily to hourly resolution proxy records and confirm them using known daily weather for the location (Figure 7). The technique could be applied to fossil shells from the distant past to obtain similar weather information. The authors studied giant clam shells using the NanoSIMS technology to determine the iron/calcium (Fe/Ca) and strontium/calcium (Sr/Ca) ratios in different layers of the shells and were able to confirm the presence of nearby tropical cyclones (Figure 8) and also the impact of cold weather surges on the shells (Figure 9). [i] 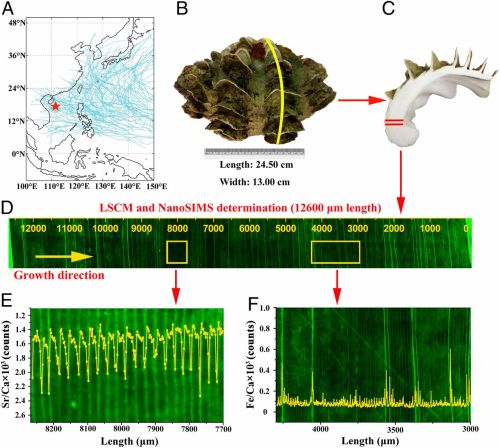 Figure 7: D is the layers of the shell by autofluorescence; E and F are the NanoSIMS elemental ratios for indicated shell segments

Studying how aerosols impact the atmosphere

Understanding the makeup of different parts of the atmosphere and how they change is a major aspect of climate science, in addition to the study of air pollution and health impacts. Mass spectrometry plays a key role in this area (Figure 10).[ii]

Why are aerosols important for understanding climate?Couds reflect incoming solar radiation back into space and also absorb outgoing radiation, keeping that energy inside the Earth’s atmosphere. Aerosols are a key part of cloud formation, and the chemistry of aerosol particles influences the type of cloud they form. Thus aerosols have a major influence on the greenhouse effect, as well as on other aspects of weather and climate.

Many analytical techniques are used to analyze aerosol particles and to follow their behavior in the atmosphere. This essay is focused on mass spectrometry (MS), and several recently-published examples will showcase how the different types of MS can address specific aspects of aerosol chemistry:

These are selected from many publications in this area to show the impact of mass spectrometry on the study of aerosols, but are not intended to cover all aspects of the field!

Also, while this essay is focused on mass spectrometric technologies and their applications in climate science, I hope that the limited details about these technologies do not get in the way of understanding their significance for climate research.

Metals are often found in aerosols, but are hard to measure accurately when the aerosols have to be transported to a laboratory. A new approach using Extractive Electrospray Ionization (EESI) with a portable Time-of-Flight MS system has enabled field measurements.[iv]

Organic compounds in aerosols (organic aerosols or OAs) can have a substantial influence on how they develop and impact the atmosphere as they travel through it. It is difficult to characterize the many components of the OAs, especially since they are constantly changing as they travel in the atmosphere.

New mass spectrometric technology is making it possible to improve the accuracy and completeness of atmospheric OA measurements in real time. This enables measurement of secondary organic aerosols (SOAs) formed in atmospheric reactions as they happen. Extractive Electrospray Ionization combined with ultra high resolution Orbitrap enables measurements of OAs at relevant concentrations and a sufficient range of mass to cover the great variety of sizes of the OAs. [v] Figures 13 and 14 show examples of studies of a common OA, α-pinene.[vi]

Figure 14 (right): SOAs produced from these two compounds (top and middle) and measurements of ambient air in summer 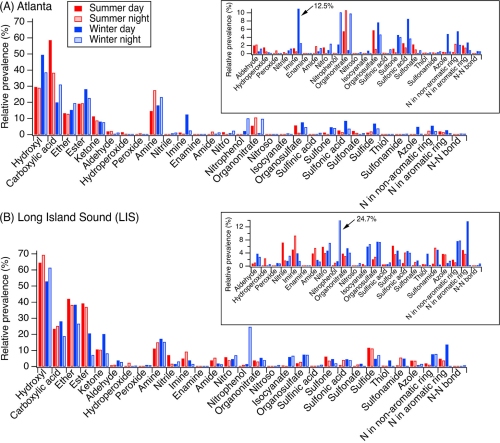 Dimethyl sulfide (DMS) is produced by phytoplankton in the oceans and is quite volatile. DMS is readily oxidized to form sulfur dioxide and sulfuric acid, among many products found in the atmosphere. There are several mechanisms for the oxidation and understanding them is important for modeling formation of aerosols and their climate impacts. A new study has used Time of Flight Chemical Ionization Mass Spectrometry to study sulfur compounds in air. The study was carried out in NASA aircraft missions that covered the air above the open Atlantic and Pacific oceans from 80º N to 85º S.

Hydroperoxylmethyl thioformate (HPMTF) was discovered to be a significant portion of the atmospheric sulfur and to play a major role in aerosol formation. The authors conclude: “Observationally constrained model results show that more than 30% of oceanic DMS emitted to the atmosphere forms HPMTF. Coincident particle measurements suggest a strong link between HPMTF concentration and new particle formation and growth. Analyses of these observations show that HPMTF chemistry must be included in atmospheric models to improve representation of key linkages between the biogeochemistry of the ocean, marine aerosol formation and growth, and their combined effects on climate.” [viii]

The paper includes a chart showing how the new information fits into the role of sulfur in aerosols, and the uncertainties in HPMTF chemistry in the air that need to be addressed in further research (Figure 16).

Figure 16: On the left: The basic mechanism of HPMTF formation. On the right: Concentrations observed using the NASA Atmospheric Tomography (ATom) mission, which used the Time of Flight Chemical Ionization Mass Spectrometry instrument

Atmospheric chlorine-containing aerosol particles are continually generated by sea spray. However, such particles are also observed far inland, especially in winter, due to use of rock salt and salt solutions to deice roads and sidewalks. More than 20 million tons of salt are used for this purpose in a typical winter in the United States alone. The chlorine in salt-containing aerosols leads to formation of nitryl chloride (ClNO2), which is a significant concern for health.

Just-published research used Aerosol Time-of-Flight Mass Spectrometry to measure the size and chemical composition of individual aerosol particles and used Chemical Ionization Mass Spectrometry to measure chemical compounds in the air in a winter period (February 17-18 and March 7-8) in an inland location adjacent to a roadway and sidewalk on which road salt and brine were applied during the study period.[ix] Their results are shown in Figure 17. The amount of ClNO2 is very low during the daytime as sunlight breaks the molecule into its reactive components, and increases overnight. The reactive components affect the levels of many atmospheric compounds and particulate matter, so having better experimental information is helpful in understanding this system.

Biosketch Roland Hirsch has served the field of analytical chemistry in a 52-year career that spans teaching, research, and leadership at Seton Hall University, and 33 years of government service at the National Institutes of Health and the U.S. Department of Energy. Roland has been a leader of the ACS Division of Analytical Chemistry, as Councilor for 25 years, as Division Secretary for 4 years, Chair-Elect, Program Chair, and Chair, and as its Web Editor for 22 years. Roland organized the 50th-anniversary celebration of the Division and 25 years later, wrote the definitive history of the first 75 years of the Division, published in Analytical Chemistry in 2013. Roland has also been active in ACS Governance, including Chair of the Committee on International Activities, Secretary of the Committee on Nominations and Elections, Member of the Committee on Divisional Activities, Senior Chemists Task Force, Committee on Committees, and Liaison to the ACS Committee on Professional Training.

Based on a presentation prepared for the American Chemical Society National Meeting in Philadelphia in March 2020. It was to have been in the Division of Analytical Chemistry’s session “Advances in Mass Spectrometry”. The meeting was canceled, but this presentation was revised and made available on the web site for the meeting: https://www.morressier.com/article/mass-spectrometry-essential-research-climate-science/5e735e33cde2b641284a879e

If you cannot access the presentation, please go to https://account.acs.org/ssoamweb/account/doSignUp where you can obtain an ACS ID at no charge. It should allow you to sign in to view the presentation.