House Science Committee Hearing:  where the so-called ‘deniers’ behave like scientists and the defender of the establishment consensus . . . lies.

Well, I’ve returned home following the recent Hearing, and have had a chance to reflect, as well as follow the twitter and media responses to Hearing.

Response from the media

A relatively balance summary is provided by EOS.

Much ado has been made about the lack of balance among the witnesses, with three ‘deniers’ and one ‘establishment’ scientist supporting the consensus.  Well if everybody agrees with the consensus and with each other, I don’t see why they need more than one scientist on the consensus side.

Ironically, being the only witness called by the Democrats played to Mann’s favor.  All of the Democrat members fed Mann ‘red meat’ questions, and some of the Republican members also asked Mann questions.  Mann probably got more air time in the questioning than Christy, Pielke, and myself combined.

But even though Mann is in the majority with his claimed 97% consensus, he still claims victim status as a minority.  From Julie Kelly’s NRO article:

In his testimony to the House Science Committee on Wednesday, Michael Mann, one of the world’s leading climate scientists, told the story of Trofim Lysenko, a plant scientist who worked for Stalinist Russia:

Lysenko was a Russian agronomist and it became Leninist doctrine to impose his views about heredity, which were crackpot theories, completely at odds with the world’s scientists. Under Stalin, scientists were being jailed if they disagreed with his theories about agriculture. And Russian agriculture actually suffered, scientists were jailed, many died in their jail cells and potentially millions of people suffered from the disastrous agriculture policies that followed from that.

The gist of Mann’s anecdote was that scientists who challenge the ruling government’s diktat on any given scientific issue are demonized and punished while innocent bystanders suffer. In the here and now, this would seemingly apply to the minority of scientists brave enough to question the reigning dogma of climate science. After all, these are the folks who have been threatened by top law-enforcement officials, personally and professionally attacked by their peers, and even driven out of their academic positions due to the harassment.

But astonishingly, Mann was not talking about those scientists: He was talking about himself. In his alternative universe, he and other climate scientists are the martyrs, oppressed and silenced by the Politburo. Never mind that Mann — a tenured professor at one of the country’s top public universities — opened his testimony by reciting a prodigious list of awards he has won, books he has authored, scientific organizations he leads. He is celebrated by the media and environmental groups around the world, and yet in front of Congress he talked like a guy on his way to the Gulag. It takes a special blend of hubris, juvenility, and dishonesty to portray yourself as a victim when you are really the bully.

I also find Mann’s musings on the Serengeti Strategy to be . . . ironic.  From his testimony:

I coined the term “Serengeti Strategy” back in 2012 in “The Hockey Stick and the Climate Wars” to describe how industry special interests who feel threatened by scientific findings—be it tobacco and lung cancer, or fossil fuel burning and climate change—single out individual scientists to attack in much the same way lions of the Serengeti single out an individual zebra from the herd. In numbers there is strength, but individuals are far more vulnerable. Science critics will therefore often select a single scientist to ridicule, hector, and intimidate. The presumed purpose is to set an example for other scientists who might consider sticking their neck out by participating in the public discourse over certain matters of policy-relevant science.

Mann is a master of the Serengeti Strategy, as he illustrates in his written testimony by going after me:

That includes the study28 led by Zeke Hausfather of the “Berkeley Earth” project—a project funded in part by the Koch Brothers and including29 as one of its original team members, climate change contrarian Judith Curry. (JC note:  footnote 29 is the source watch slime job on me )

Well, that was a first . . . being called a ‘climate science denier’ in the Congressional Record.

I always thought that there would be consequences for lying during Congressional testimony.  I guess not.  Mann got caught out in several blatant lies during the Hearing.

This is pretty classic:  Mann denies calling me a denier [link]

A number of statements have been attributed to me. I don’t believe I’ve called anybody a denier

when he states this in his written testimony:

Mann ‘denies’ being associated with the Climate Accountability Institute [link].  Julie Kelly writes in an article Michael Mann Embarrasses Himself Before Congress

Turns out Mann appears to be a bit of a denier himself. Under questioning, Mann denied being involved with the Climate Accountability Institute even though he is featured on its website as a board member. CAI is one of the groups pushing a scorched-earth approach to climate deniers, urging lawmakers to employ the RICO statute against fossil-fuel corporations. When asked directly if he was either affiliated or associated with CAI, Mann answered “no.” [JC note:  Mann also lists this affiliation on his CV]

Some additional ‘porkies’ are highlighted in an article by James Delingpole.

Michael Mann’s testimony plays to the theme of the evil oil companies and Koch brothers being responsible for climate denial.  I’m still waiting for my check (according to Mann, I’ve earned one).

Lets take a look at Mann’s venal motives.  A little birdie dropped this in my mailbox this morning: 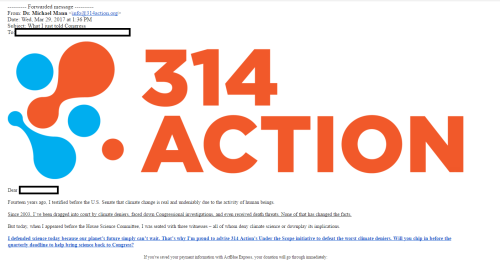 The sent time  on the email is just moments after the Hearing.  Apparently Michael Mann now has a Political Action Committee (PAC)  314.action

I imagine that my receiving this information will intensely provoke someone’s paranoia.

Well I have to say that I feared our key messages got lost in all the bickering and nonsense of the actual Hearing.

I was very heartened to see this article by Chelsea Harvey in the WaPo:  These scientists want to challenge climate research.  Congress is listening.  This article is basically about the ‘Red Team’ strategy discussed by Christy and myself.  It is a good and article, and I would like to thank Chelsea Harvey for writing this.

I will have lots to say on this topic in coming months.

Well, the Hearing was rather bizarre.  I don’t think anyone got out of it what they wanted (other than MM with his PAC donations).  I hope that my written testimony will result in reflection by some scientists.  And it seems possible that the Red Team idea will develop legs.

Some establishment scientists are calling for climate scientists to boycott these Hearings.  Well, that would be fine with me.  Scientists who don’t want to engage in respectful discussion and debate should stay home, and preach to their choirs.

Here is some advice for Lamar Smith.  If you hold another Hearing on climate change and the democrats invite Mann, either cancel the Hearing or call Steve McIntyre and/or Mark Steyn as witnesses.  Several times during the Hearing, the thought popped into my mind that I wished Mark Steyn was here.  Who could forget his performance at Ted Cruz’s previous Hearing [link].

And finally, here is Josh’s cartoon:

This entry was posted in Sociology of science. Bookmark the permalink.

458 responses to “‘Deniers,’ lies and politics”