I have prepared two new talks on sea ice to present in Nanjing.

But first, some recent context on sea ice.

Well this year, the sea ice minima was sort of a non event, essentially the same as 2013, with a continued (significant) increase in sea ice volume. Last June, I did a post What can we expect for this year’s Arctic sea ice? Which included my ‘expert’ forecast for the 2014 sea ice minima: “similar to last year.”

Last September, the Royal Society hosted a Workshop on Arctic sea ice reduction: the evidence, models, and global impacts.  Objectives of the meeting:

Several of the meeting participants tweeted heavily during the Workshop, notably Gavin Schmidt.  There is a good summary of the meeting at envision nation.  It seems that Gavin got overly snarky, both on twitter and in his presentation. Apparently he was dissing the presentation of Peter Wadhams (of ‘spiral of death’ fame), and also the idea of a methane bomb in the arctic. See this post by Nick Breeze at climate change psychology and an entertaining post by William Connolley: Wadhams and the mighty shtwit storm.

Nanjing University invited me to lecture on Arctic sea ice, presumably based on my expertise in Arctic sea ice (see this link for my publications during the period 1983-2005). It is relatively rare for atmospheric science students (or even oceanography students) to be exposed to sea ice in their university curriculum.  In particular, they are hoping for some perspective on why their climate model is having difficulty with simulating sea ice.

With this context, I prepared two lectures:

On the RS list of speakers, I was pleased to see Don Perovich, who was my co-conspirator in the 1990’s in planning the SHEBA field experiment in the Arctic Ocean. I emailed Don and asked him for a copy of his slides, which he graciously sent to me and gave me permission to use in my Nanjing talks. His presentation has some very interesting results on sea ice mass balance that are unpublished, which I didn’t use, but I did include and some slides from Perovich’s RS presentation illustrating some previously published field observations (labeled ‘courtesy of Don Perovich’).  Here is a link to Perovich’s publications.

The topics that are included in this presentation include:

My .ppt presentation can be downloaded here [sea ice climate dynamics ].  In this presentation I cover a lot of territory that I’ve covered in previous posts.

I’ve selected some slides here that directly respond to the issues discussed by the RS Workshop, a perspective on Arctic Ocean sea ice variability that apparently was NOT included in the Workshop. 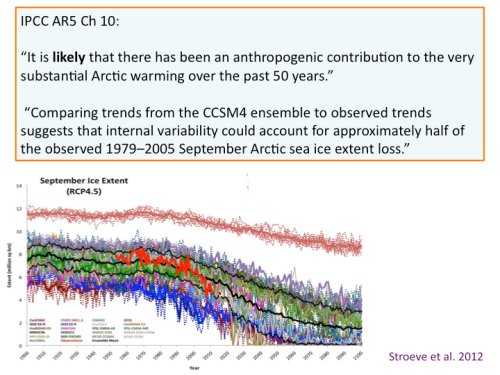 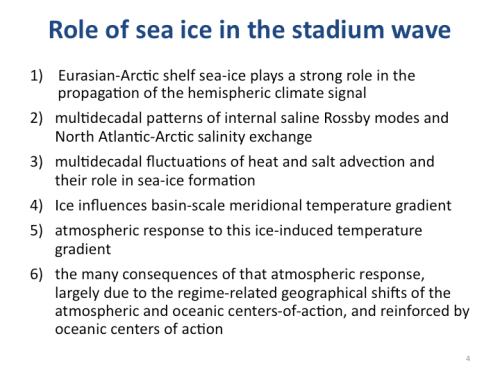 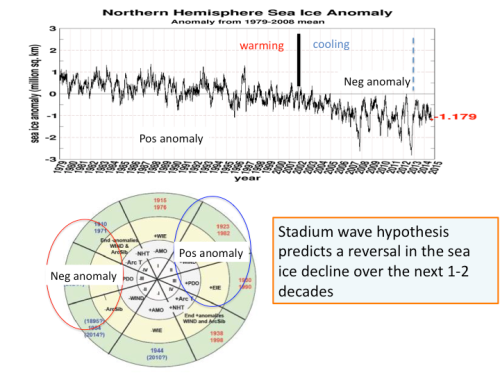 Specifically with regards to the current period of sea ice minimum, the stage was set in the early 1990’s with anomalously positive Arctic Oscillation.

Understanding the current reduction of Arctic sea ice requires that regional variations and processes be considered. 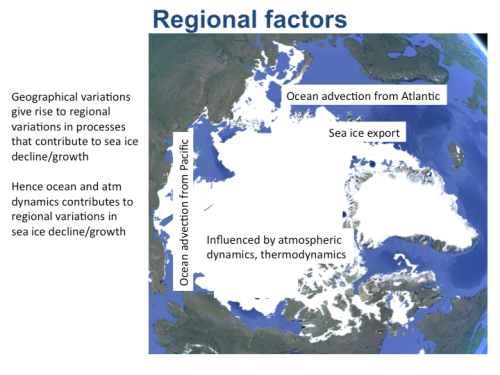 In context of the stadium wave, we see that the Kara Sea sea ice (WIE) may have begun recovering, with an expected continued reduction of East Siberian sea ice.  Note that the Beaufort Sea sea ice was not considered in the stadium wave analysis because we used a Russian data source for early 20th century sea ice (which did not include the American Arctic).  In any event, I’ve hypothesized in the previous slide that the Beaufort sea ice responds more to local thermodynamics and atmospheric circulations (rather than ocean advection). 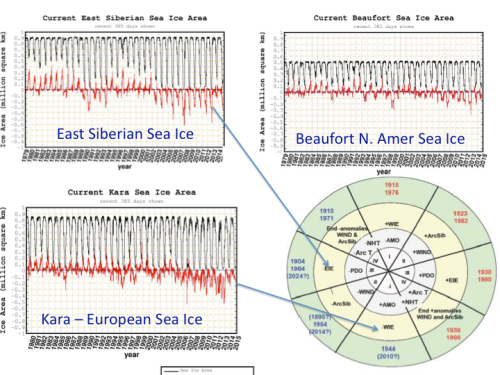 So . . . what is the bottom line on the attribution of the recent sea ice melt? My assessment is that it is likely (>66% likelihood) that there is 50-50 split between natural variability and anthropogenic forcing, with +/-20% range. Why such a ‘wishy washy’ statement with large error bars? Well, observations are ambiguous, models are inadequate, and our understanding of the complex interactions of the climate system is incomplete.

At this point, I think anthropogenic is 50% or less.  Critical to our understanding of the attribution of the sea ice decline is to flesh out the pre-1979 sea ice observations, a task that is being undertaken by John Walsh et al. 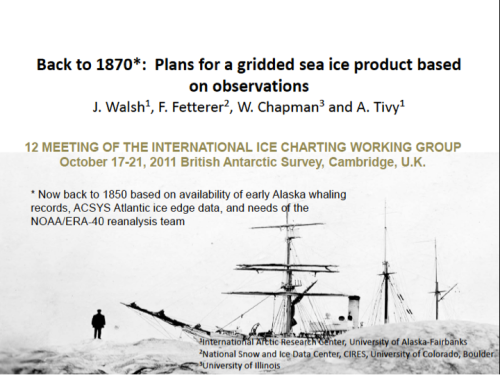 And finally, my prediction for 2015 sea ice minima.  I predict minimum sea extent will be the same or greater than 2014, with a continued recovery of sea ice volume.  I expect continued recovery in the Atlantic portion of the Arctic, with continued low sea ice extent in the Siberian Arctic.

My decadal scale prediction is either no trend in sea ice minima or an increase (I do not expect continued decline in the coming decade).

I don’t place too much confidence in mine or any predictions on these timescales, but my confidence could increase once I can analyze Walsh et al’s forthcoming historical sea ice analysis.

This entry was posted in Polar regions. Bookmark the permalink.