And now for the 2nd question: Does the massive cold air outbreak blanketing much of the U.S. disprove global warming?

The media are mostly  in stupid mode over this one.

The bottom line:  the claims that greenhouse warming causes more cold waves like we have seen  this week really seems to be without any basis in observational evidence or in theory.  The media needs to stop pushing this unsupported argument.

It is SO frustrating that every major weather event causes such claims and counterclaims to be aired, with many media outlets unable to do the minimal research that would allow them to give the public more dependable information.

All this bogus reporting has done substantial damage, with many American’s believing that global warming is already causing our winter weather to become more extreme, while the observational evidence suggests no such thing.  One day some sociologists will study this situation and the psychological elements that drove it.

The arguments in favor of an AGW impact on the cold air in the U.S. come from Jennifer Francis (see this previous post).

If nothing else, the ‘polar vortex’ has stimulated some good cartoons: 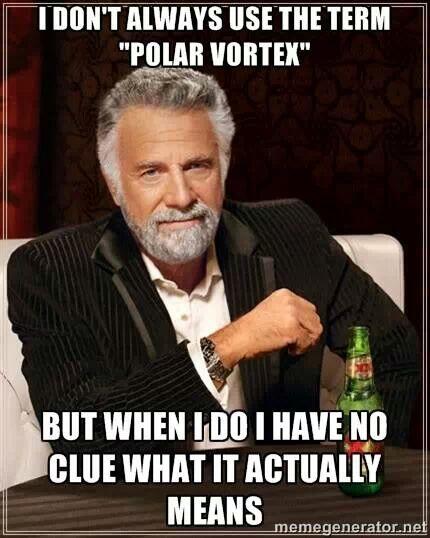 I can’t wait for this Movie! pic.twitter.com/LZpo8bAX9R

I am currently sitting in Atlanta Hartfield Airport, trying to get to New York City tonite, flights are still messed up.  The more interesting challenge may be getting out of NYC tomorrow nite.  In any event, in a few weeks I will be able to discuss what promises to be an EXTREMELY  interesting meeting in NYC.

332 responses to “Is global warming causing the polar vortex?”