Fossil fuel availability affects how much CO2 will be emitted, which might or might not affect climate much. Hubbert’s 1956 insight suggests total peak oil is near (around 2020), and that gas and coal will peak by midcentury.

The most recent comprehensive analysis is Maggio and Cacciola, When will oil, natural gas, and coal peak?  There are many other studies and books (including mine) with similar estimates within ±10 years. 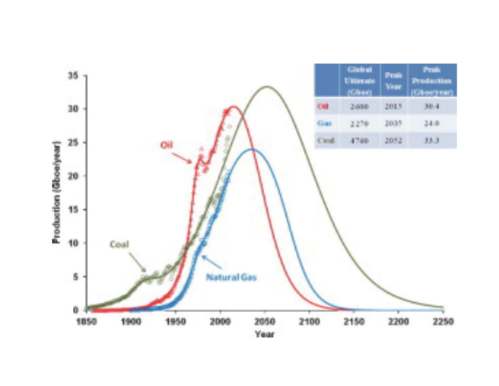 This issue is as vehemently disputed as CAGW. IPCC AR4 (WG3 section 4.3.1) says there is no peak in any fossil fuel production by 2100. This may prove as wrong as the AR4 equilibrium climate sensitivity estimates and extreme weather predictions deconstructed in my recent book,  The Arts of Truth.

IPCC’s AR4 view is supported by Harvard’s 2012 Maugeri paper “Oil, The Next Revolution”. Maugeri says additional 2020 oil capacity will be at least 17.6mbpd above the present 93, with ‘no peak in sight’ and prices falling.

This paper is another hockey stick. It is so fundamentally flawed in so many ways that, to quote physicist Wolfgang Pauli, “It is not even wrong”. Nevertheless, it has gotten wide mainstream media publicity.

Creaming curves, Hubbert linearizations, and probit transforms all say about 75% of all potential petroleum reserves have been discovered. So does the USGS.[1] Most of what remains to be discovered is unconventional oil.

Conventional oil has already peaked despite improving recovery factors from enhanced oil recovery (EOR) techniques like water flood, steam flood, MRC strippers, and CO2 injection. [2] Maugeri says this is not so even by 2020 (except in Norway and Mexico). For example, he says (p. 31) that 2020 capacity in Saudi Arabia will increase to 13.2mbpd. Simmons’ Twilight in the Desert (2005) explained why that is geophysically impossible. In 2011 wikileaked diplomatic cables proved Simmons correct, and Maugeri’s analysis just wrong.[3] Ghawar peaked in 1981 at 5.7 mbpd. In 2010, Aramco announced that Ghawar had 71 Bbbl of remaining reserves after reworking the Haradh section’s EOR, and would last another 38 years with future reductions from 4.8 mbpd (to limit rising water cut). Ghawar is (4.8/9.5) 50% of present Saudi production, and 6% of the world production. In 2011, Saudi Aramco drilled 161 exploratory wells with only one oil discovery, Wedyan-1, flowing 2.3kbpd. Aramco’s 2011 well average was 5.9 kbpd. Even Saudi Arabia will be hard pressed to maintain capacity to 2020.

Peak oil timing depends on the rate at which this unconventional capacity replaces declining conventional existing production. It does not depend on the amount of technically recoverable reserves (TRR, at any price). As oil’s price inevitably continues to increase, additional marginal capacity will become viable. But not at extraction rates commensurate with conventional oil’s decline.

(1) Canada estimates Athabasca bitumen TRR is at most 20% of resource in place for both geological and chemical reasons. That is about 340 Bbbl, just 40% of OPEC’s present true reserves (which include Venezuelan unconventional extra heavy oil). OPEC’s true near 900 Bbbl reserves did not prevent peak conventional oil production half a decade ago. The Canadian Association of Petroleum Producers (CAPP) says ultimate economically recoverable syncrude UER (at about $100/bbl using new SAGD technology) is 175 Bbbl. This is less than remaining conventional Saudi reserves. CAPP estimated in 2012 that 3.2 mbpd could be produced by 2020 if oil prices hold or rise. That would be just a third of present Saudi capacity. Maugeri (p. 36) says it will be 4.3 mbpd with oil prices falling. It is doubtful Harvard knows more than CAPP about the $112 billion it is investing for 2020 capacity. 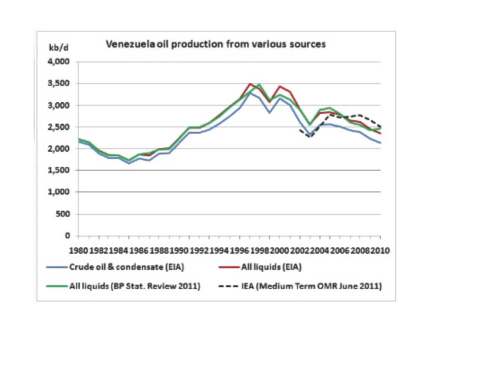 (3) Tight oil shales are all the rage in US mainstream media (and now Australia’s with the Arckaringa discovery), as well as in Maugeri’s analysis. The five major US tight oil shale (not kerogen ‘oil shale’) formations are well known.[6] The largest is Bakken. In 2008 the USGS revised its technically recoverable Bakken estimate up to 3-4.3 billion barrels. In 2011 USGS re-estimated the second largest, Eagle Ford, up to ≤3.35 Bbbl. These estimates say less than (4.3+[4*3.35]) 17.7Bbbl is recoverable (at any price) from all five main formations based on present information. Maugeri says the 2008 USGS Bakken estimate is wrong because it only used production information through 2007. It would have been very difficult to do otherwise. (And in 2011 the EIA commissioned an independent TRR estimate of all US tight oil and gas. Bakken was placed at 3.6Bbbl TRR.) Maugeri bases his 42B bbl estimate (p. 47) on an unpublished USGS paper from 1999 written 6 years before any fracked horizontal Bakken wells existed! There are 6 ‘sweet spot’ fields within the US Bakken (at $100/bbl). These cover about 15% of the formation and were found by…drilling.

In 2011 DoE convened an expert advisory panel chaired by an oil major (Shell) and two smaller tight oil/gas development leaders (Anadarko, Chesapeake Energy). Their conclusion was that the US might reach 2-3mpbd by 2035 (at over $100/bbl) IF environmental restrictions were eased (e.g. the frack ban imposed by New York), and IF necessary infrastructure was permitted (e.g. the Keystone XL pipeline Obama deferred in 2012). Maugeri (p. 51) estimates 4.2mbpd by 2020 with prices declining, a stunning Mann-like hockey stick. Harvard knows more about this than the oil companies doing the producing?

Maugeri extrapolated to the US from the Bakken. His egregious error (p. 50) was assuming Bakken wells decline 15% over their first 5 years of production, and 7% per year thereafter, like conventional wells. Bakken wells decline by 80% in just two years, and exhaust to strippers in 5. Rather than 85% of well capacity remaining after 5 years, there is essentially none. The 2012 information for North Dakota’s Bakken is available from the North Dakota Department of Mineral Resources. 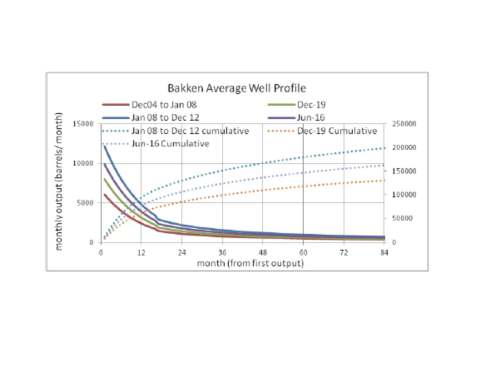 Drilling more wells is not the long-term solution. North Dakota says there is only room to drill 11,000 more wells on top of the 6000 that already exist in its 5 named ‘sweet spot’ fields. An EIA 2012 map shows that these are over near the Montana border, adjacent to Montana’s field. More discoveries are needed.

Maugeri has literally fabricated another hockey stick by hiding the decline in conventional oil, and by exaggerating unconventional oil capacity increases.

[2] Between 2006 and 2008. IEA World Energy Outlook (WEO) 2010 page 125.  WEO 2012 confirms this remains so. And mean recovery of 27% is below the median of 34%, as poorer quality reserves are brought into the reserve pool. Hubbert called this peak within 5 years in 1971. [Scientific American, Energy and Power at page 39] That is a stronger confirmation of peak oil than 16 years absence of warming falsifies GCMs.

[3] BP Energy Outlook 2012 gives remaining Saudi technically recoverable reserves (all economic) at 265 Bbbl based on OPEC. These are exaggerated because of the ‘quota wars’. Wikileaked diplomatic cables show the Saudis told the US their overstatement is about 40%, and that ‘official’ capacity of 12.6mbpd is actually about 10. Guardian.co.uk. This is not news, although the ‘secret’ ‘official confirmation is. 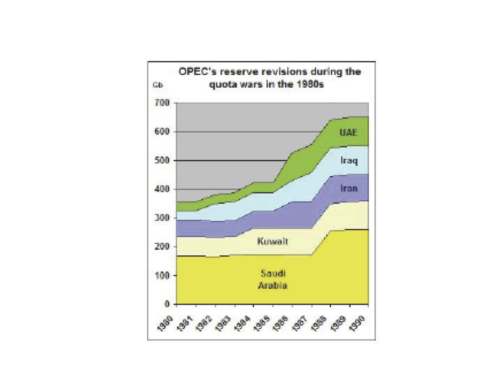 Remaining Saudi reserves are probably (265/1.4) 190Bbbl. Present Saudi production is about 9.5mbpd; they have little spare capacity. Since 2000 the Saudis have discovered substantial natural gas, but little additional oil.

[6] Mainly oil. Other formations, like Fayetteville and Marcellus, are mainly gas.

507 responses to “Another Hockey Stick”