Detection of Global Economic Fluctuations in the Atmospheric CO2 Record

Current attempts by national governments worldwide to control industrial CO2 emissions following the recommendations of the IPCC could be viewed within the scientific paradigm as the projection of a large scale experiment on the earth’s climate system to validate the hypothesis that anthropogenic CO2 emissions through the burning of fossil fuels and land use changes (inter alia) are a major factor driving climate change. If such policies are to be effective,  it is hypothesized here that periodic global economic and industrial fluctuations in activity of sufficient magnitude should be capable of producing a signal detectable by atmospheric CO2 monitoring programmes.

Here, the preliminary identification of several candidate signals of large scale economic fluctuations discovered in the atmospheric CO2 record from the Mauna Loa observatory are discussed. More detailed and extensive analysis of these signals by workers in the field may be expected to reveal important insights into biospheric responses to human induced environmental change and allow more detailed assessment of the outcome of programmes designed to control GHG emissions.

One of the most robust pieces of scientific evidence concerning recent changes in the global climate system is represented by the 52 year record of atmospheric CO2 concentration collected at the Mauna Loa Observatory (MLO).2, 3 A rather striking feature of the MLO CO2 record is the continuous year on year fall in the annual increment to the measured concentration of atmospheric CO2 at MLO that took place between 1987 and 1992. Curiously this fall in the excess amount of CO2 arriving in the atmosphere coincided with a global economic recession which occurred over almost the same period of time. This economic recession began on “Black Monday”, October 19th 1987 when the Dow Jones Index fell by nearly 23%. This was later followed by the Gulf War of 1990 which profoundly affected oil prices. 4 The concomitant financial contagion affected Global industrial output and as a result annual growth in global industrial CO2 emissions began to slow and then to briefly fall (Figure 1).5

In addition the recession immediately affected the annual growth in global consumption of NPK fertilisers which stalled and then quickly turned negative as the recession progressed. Once again the coincidence of these effects alongside a falling annual atmospheric CO2 increment is very striking (Figure 2).6

It may be asserted that choice of NPK growth rate is selective since in any economic recession the growth of many products and services inevitably follow the trajectory of the economy as a whole. The critique is certainly sound; however, NPK fertilisers have profound effects on natural ecosystem processes, including release of methane, reduction of soil carbon fixation, eutrophication of water courses and coastal aquatic ecosystems among many others.7 Unlike direct CO2 emissions to the atmosphere NPK fertilisers influence biological reaction rates which drive parts of the modern carbon cycle. In addition anthropogenic inputs to the global carbon cycle are still small (ca 5%) compared to inputs to the global nitrogen cycle (ca 200-300%).1,7 As a potential source of atmospheric CO2 emissions and other GHG missions the effects of NPK fertilisers may be quite significant.  They may also perhaps be thought of as an easily available representation of certain types of land use change. Thus a connection to GHG emissions is not easy to completely dismiss.

A number of earlier studies of the atmospheric CO2 record have concentrated on the evolution of the amplitude of the seasonal CO2 cycle at Mauna Loa.3, 8 The seasonal CO2 cycle at Mauna Loa is characterised by an annual rise to a maximum seen in May followed by a rapid fall in concentration to a minimum in October, although the exact month of the inflexions can vary slightly from year to year.3 The seasonal cycle has been characterised as representing the balance of ecosystem CO2 exchange arising from the net balance of ecosystem respiration and photosynthesis although it is recognised that the air masses sampled at Mauna Loa also show seasonal changes and variations from year to year. This seasonal cycle is superimposed upon a background of increasing atmospheric CO2 concentration believed to be a result of increased CO2 emissions caused by human industrial and agricultural activities.3 The evolution of this cycle over time is shown in Figure 3. where it can be seen that the amplitude has gradually increased over the years. This has been extensively discussed elsewhere; in particular the rapid decline in amplitude from the mid 1990’s to the mid 2000’s has been ascribed, inter alia, to the influence of drought in the United States.3 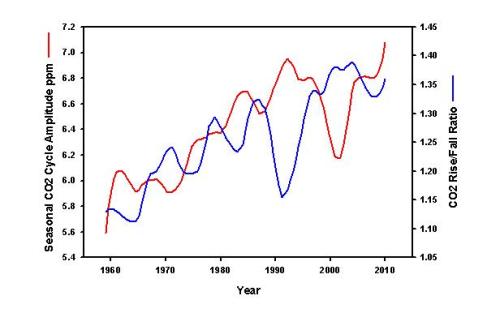 Figure 3. Seasonal CO2 cycle amplitude at MLO (ppm) and R/F Ratio – the ratio of annual CO2 rise and fall over the seasonal cycle.

Also shown in Figure 3 is the changing ratio of the rise in CO2 (from annual minimum to maximum) to the corresponding fall (from maximum to minimum) each year – the R/F ratio. A value of 1.0 for this ratio represents the condition in which there would be an annual increment of zero ppm to the atmospheric CO2 concentration. Such has never occurred over the entire length of the MLO record and in general the ratio has increased with time indicating an increase in the excess of CO2 arriving in the atmosphere over that removed year on year.  It is noticeable that the decadal fluctuations in the seasonal cycle amplitude and the R/F ratio are out of phase. Whenever the SCA reaches a local maximum the R/F ratio is approximately at its local minimum. Together these cycles determine the annual increment to the atmospheric CO2 concentration and the striking feature of a marked decline in the  annual increment to CO2 concentration noted earlier is also very apparent in the R/F ratio which declines markedly between the late 1980’s and early 1990’s.

By means of a simple procedure to remove the steadily rising trend from the R/F ratio this variable may be more easily compared to changes in global industrial activity represented by annual changes in fossil fuel emissions (Figure 4). 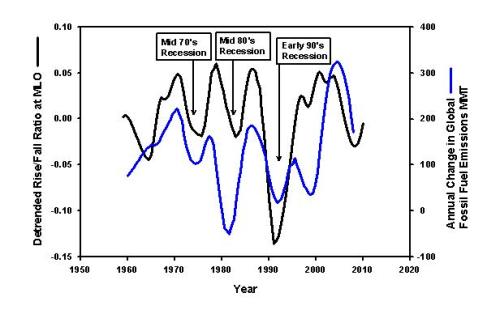 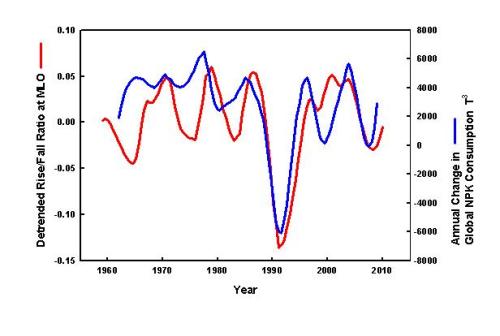 The global economy is currently undergoing a renewed period of financial crisis. This crisis began almost 3 years ago with the collapse of Lehman Brothers, and has not yet been wholly  “contained”. It is expected to be deeper and to last longer than the crisis of the 1990’s.9 Its effects on industrial output, CO2 emissions, NPK consumption, amongst a host of other effects may be expected to be profound. The observations made here suggest that the various recessions of the late 20th century can be viewed as experiments on the global climate system and that another experiment is now underway. Taken together a more detailed analysis of the effects of these recessions on the global climate system and in particular on the growth and sequestering of atmospheric CO2 may produce a wealth of information to the benefit of both science and economic policy. The effects of the current deep recession on the CO2 record at various global monitoring stations will no doubt be followed with interest. Since the current recession is unlikely to develop in exactly the same manner as previous recessions and that each recession proceeds from a different baseline of Global CO2 emissions, comparison and detailed analysis of the effects of each recession may provide significant new information to the benefit of science and public policy.

On a final note it is likely that a deep economic recession will place science budgets under pressure. It would seem to be the height of folly to allow such pressures to affect the continued development and improvement of environmental monitoring programmes such as those discussed here.

Data for the monthly Atmospheric CO2 concentration and the Annual Increment to CO2 concentration at Mauna Loa Observatory and Industrial CO2 emissions were obtained from CDIAC. The amplitude of the seasonal CO2 cycle was taken to be the difference between the annual monthly maximum concentration (usually found in May but sometimes occurring in neighbouring months) and the average between the minimum concentration of that year and that of the previous year. The R/F Ratio for each year was calculated from the rise in CO2 concentration from the previous minimum to the following maximum and the fall from maximum to minimum of that year expressed as a ratio. Data for the global consumption of NPK fertilizer in the form of the total mass of N2, P2O5, and K was obtained from the International Fertiliser Trade Association. In Figures 4 and 5 emissions and NPK consumption are expressed as annual changes from year to year. The detrended R/F ratio is expressed as the residuals obtained after fitting a 2nd order polynomial to the trend in R/F ratio. All data in these figures has been smoothed by fitting a cubic Loess function with a sampling factor of 0.25. Figure 3 was constructed similarly by recombining the de-trended smoothed data with the polynomial function describing the trend.

9. Some Economist or DT piece?