JC note: this post is a follow on to the Water Vapor Mischief thread that discussed a paper by Makarieva et al. entitled ” Where do winds come from? A new theory on how water vapor condensation influences atmospheric pressure and dynamics.”  Douglass Shiell is coauthor on the paper.

Is it possible that a key phenomenon concerning how the World’s climate works has been widely overlooked?  Climate scientists acknowledge many areas of uncertainty but the suggestion that a principle cause of global atmospheric motion has been neglected is, understandably, hard to swallow.  But being hard to swallow does not make it wrong.  For science purists all new ideas should be welcomed and assessed on their merits.  Are the new ideas logically consistent with what we know already, can they make predictions that we might use to distinguish them from alternatives?  This is not simply an academic point – let me recount an ongoing story from my vantage point.

I live in a forest in central Africa: lush and green with regular rain.  We are thousands of kilometres from the Atlantic Ocean to the West and the Indian Ocean to the East.  How does so much rain get to be here in the middle of a continent (a similar pattern is seen in the Amazon)? You might think that climate scientists have this all clear and agreed long ago … but I am not certain that this is the case.  One theory, developed and promoted primarily by Anastassia Makarieva and Victor Gorshkov implies that forests are the reason we get rain in the centre of Africa and other continents is the forests.  They attract rain.

The details of the theory concern the role of water vapour in the development of atmospheric pressure gradients.  I will not detail all the basic physics here (I share key links below) but the mechanisms concern how condensation and evaporation influence atmospheric pressure and cause winds.  These winds also carry moisture which can fall as rain.

But while Anastassia and Victor have had success publishing their work in peer reviewed physics and environmental journals (please visit their site) this work lacks much recognition by climate researchers.  Some of those I have communicated with find the ideas interesting but do not see a need for a new theory when current models already “work very well”, others note that if these ideas were correct such relationships would have been identified long ago – so they “must be flawed”.  Some welcome the ideas and find them stimulating.

When I first came upon Anastassia and Victor’s work I struggled with the derivations and the often complex language – but I was intrigued too.  I was keen to know if they might be right – even if that was a small chance it would be important.  They are offering a new way to understand how climate works and a new reason to value forests.  If they are wrong?  Well fair enough that is how science works – new ideas need to be welcomed and evaluated.  What was required was getting the ideas more attention.  I persuaded a colleague of mine, Daniel Murdiyarso (a member of the IPCC) to help write a review on the ideas which we published jointly in April 2009.  That got some media coverage. You may have seen some of it: e.g. New Scientist,Scientific American and Mongabay. We even got a recent mention in the Economist. You can see our original article inBioscience (here is a text version).  In the article we highlighted – based on results presented in Anastassia and Victor’s work – the ability of the new theory to explain rainfall in the interior of large continents (see figure 1). 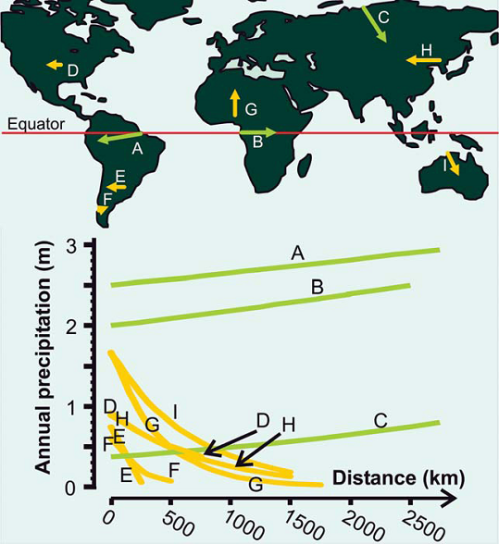 But of course just because we were intrigued and impressed by the theory doesn’t make it right.  Perhaps there was some basic flaw that we’d all overlooked.  What was needed next was to ensure that science does what it is supposed to do: welcomes the new idea and critically appraises it for logical consistency and ability to fit reality (data).

I teamed up with Anastassia, Victor and colleagues and we agreed to try and set out the details of the physical ideas in a manner that would get noticed by the climate research community.  That is a challenge.  As an outsider you have to make sure your presentation is clear and logical and follows the conventions required by the discipline.  You have to ensure a good grasp of what has been published on related topics already.  For those who repeatedly say they “have no need” for a new theory, or “it is wrong because we would know already” we needed to spell out why doubts about the current (=conventional) theories were justified (indeed many respected climate scientists have said as much).  We also wanted to spell out how the new theory could offer new insights and opportunities – ultimately predictions are what make science.  We don’t need to prove ourselves right but we need to show how data might support or contradict our ideas.

We struggled to make the text as clear and persuasive as we could – not easy in a topic like this.  I am sure it could be better but after perhaps 20 versions, and a number of friendly readers had commented, we felt it was ready to ask wider critical feedback.  We gave our text a punchy title and submitted it to APCD, an online site where the texts and review are accessible to the public.  You can find it here.  It was accepted for review.  It got attention at various media and blog sites including here atClimate Etc, the Air Vent, and the Blackboard.

Given the interest and our hope to engage climate researchers more generally we requested JC to give us the opportunity to give you an update and invite your comments once more.  She generously agreed.

APCD had some difficulty finding two reviewers willing to assess our paper.  Dr Curry herself kindly agreed and posted her comments but at least nine others declined. We sought various solutions including posting  an appeal at WUWT that highlighted our request for a willing expert reviewer to come forward. That is solved now thanks to the helpful reaction of some climate community members to our appeal (many thanks).

Various people have already made use of the opportunity to post comments at APCD.  Some of these comments have been critical and some have been supportive.  We have responded as needed and this has allowed us to clarify and refine various points.  If you are reasonably comfortable with simple algebra and calculus and enjoy seeing science in action you can see the comments for yourself and form your own opinions.  Here is a brief summary.

Most criticisms of our work fit into one of three categories: “latent heat dominance”, “Eq. 34 is not clear”, “models already explain everything”. The first issue is considered in detail in Section 2 of our paper, where we show why the available arguments about the alleged latent heat release increasing pressure, based on consideration of adiabatic condensation at constant pressure/volume, are not valid. Unfortunately, several readers, perhaps unaware of the criticisms considered that this was not relevant. In the paper and in the discussion, we tried to explain what physics is contained in Eq. 34 and hope that readers who have the patience will now be able to follow this derivation. Finally, in the discussion we consider some modelling studies and show that they do not “explain everything” that they should.

Much of the ACPD discussion built on comments that were previously discussed in the blogosphere. Nick Stokes offered a number of comments concerning the meaning and the derivations of Equation 34 for condensation rate. These points were later raised again by the reviewers.  We have compiled the answers in Appendix 1 in our reply to Dr Curry.

Dr Gavin Schmidt commented at Jeff’s blog that the existing models explain atmospheric circulation well without involving the mechanism we propose. In our reply posted at ACPD we noted some problems with these models. These were challenged in a response from one of the authors of the original model papers.  This reply was especially valuable in that is clarified why these models cannot be used to assess the influence of condensation as we were then better able to explain in some detail in our next comment. Even those who disagree with much of the rest of our arguments might like to look at these issues in more detail as we question some of the basic concepts used in global circulation models.

Several comments pointed out previous work on the same topic.  One from Dr Gary Lackmann highlighted a number of “missing” prior publications  – this confused us a little as all but one of these was already mentioned in the main text (and the missing one was in a sense represented by a related publication by the same author).  But our reply provided an opportunity for us to explain what we felt was novel in our current work.

The all important reviewer comments were mixed but also helpful.  Dr Judith Curry identified a number of challenges that we faced and underlined that she thought the effect that we are describing is real. She identified four specific problems that she would like us to address to make the paper acceptable for publication.  We replied to these in detail and outlined a number of changes that we would like to make to the paper.

Dr Isaac Held kindly stepped in when we needed another official referee.  His comments primarily agree with previous responses. We are currently drafting our technical reply which we will post soon.  But two points that he makes deserve to be highlighted: firstly he states that our theory “has to pass a high bar” … “given the accumulated evidence, implicit as well as explicit, that argues against it” – he does not spell out either this implicit or explicit evidence, but it is presumably a statement of his confidence that climate modellers already have a reasonably good handle on how the World’s climate works.  Secondly he later suggests we avoid “appealing to authority” as “a distraction”.  There is a paradox here.  By raising the bar due to implicit evidence he is appealing to authority of climate science in general  Our appeals to authority are intended to counter the (familiar) argument that our theory is not needed, or wrong, or the bar should be raised because climate scientists already have it all fixed and sorted – Our point is that clearly climate scientists don’t have it all fixed and sorted and that some respected authorities say as much.  How else can anyone counter the “implicit” evidence that signifies a “high bar”?

Even those who disagree with our theory might concede two conclusions from the discussion so far:  a) that there is a wide range of views and opinions even among climate experts concerning the existence and impact of the vapour effect and b) that the internet offers a powerful tool in “crowd sourcing” in support of science as illustrated through testing and probing the logic and clarity of our theory.

So the story is now reaching its conclusion.  The website is public for anyone to see.

Will the theory change the World? I’m not certain … but it might.  Given current alternatives I’m still betting on the condensation-evaporation theory having a key role in understanding why I get so much rain here in Western Uganda.

Some will argue that the paper should be rejected because we cannot prove beyond all doubt that we might not be wrong.  But I would argue the opposite. Rather than raising the bar, shouldn’t we be concerned that no one has shown beyond all reasonable doubt that a new and physically sound theory of global atmospheric movement might not be right?

Moderation note: this is a technical thread that will be moderated for relevance.