Cat 5 Hurricane Irma is one for the record books; it’s eye is on Florida.

Well, the 12 year drought of major hurricane landfalls in the U.S. is ending with a vengeance in 2017.  Following the devastation in Texas by Hurricane Harvey, Hurricane Irma is bearing down on Florida.  Landfall is expected this weekend.  This blog post provides forecast history for Irma, and the latest predictions from my company, Climate Forecast Application Network (CFAN).  And finally, I address the debate on the link between hurricanes and global warming.

On 8/25, we began monitoring an African Easterly wave that was expected to form and was showing some early signs of developing into a tropical cyclone.

The National Hurricane Center (NHC) issued an invest on 8/28.  The plot below shows an early forecast from CFAN, showing CFAN’s calibrated tracks and intensities for the ECWMF deterministic (red) and the ensemble mean (black).  The NOAA GFS ensemble forecast was similar.

Irma became a named storm on 8/30.  By  8/30, the tracks for the ECMWF model were shifting closer to Florida 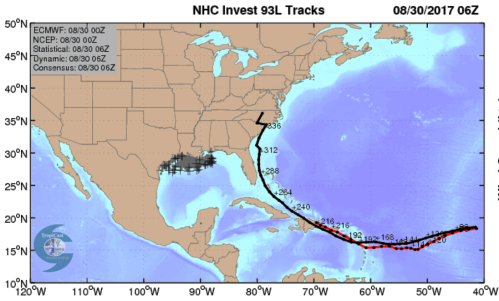 Irma became a hurricane on 8/31.  CFAN’s calibrated track probabilities are shown below for ECMWF (top) and NOAA GEFS (bottom). 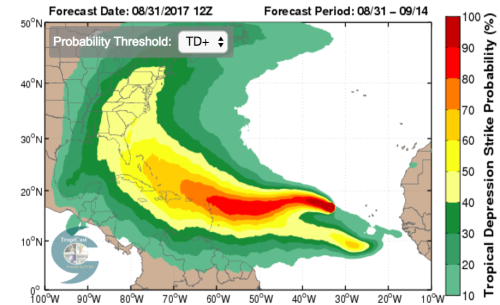 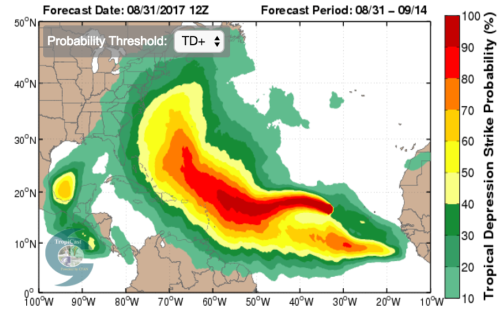 For reference, the sea surface temperatures (ECMWF operational analysis) is shown below.  Irma formed where SST was about 80F (26.5C). 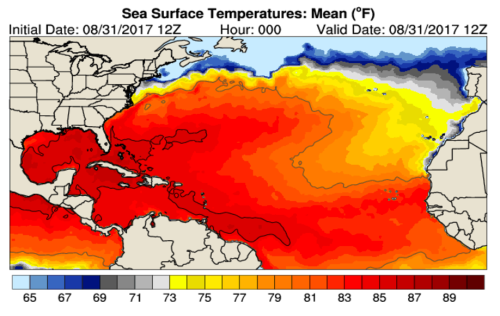 In a matter of a few hours, Irma became a major hurricane.  The surprising thing about this development into a major hurricane was that it developed over relatively cool waters in the Atlantic – 26.5C — the rule of thumb is 28.5C for a major hurricane (and that threshold has been inching higher in recent years). On 8/31, all the models were predicting a major hurricane to develop, with some hints of a Cat 5.

So why did Irma develop into a major hurricane?  We can’t blame 26.5 C temperatures in the mid Atlantic on global warming.

The dynamical situation for Irma was unusually favorable.  In particular, the wind shear was very weak. 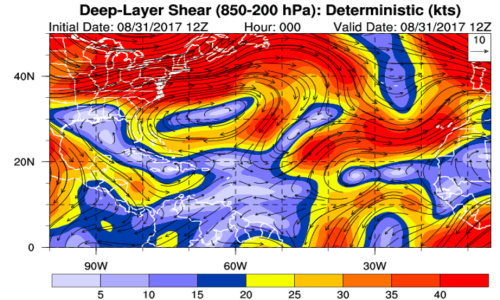 Further, the circulation field (e.g. stretching deformation) was very favorable for spinning up this hurricane.

Irma intensified to Cat 5 on 9/5.  This intensification was picked up by the models on 8/31, but at this point it was mostly a case of ‘right answer for the wrong reason’, since the models hadn’t yet settled down regarding track.

Astonishingly, Irma has hung on to its Cat 5 status through the time of this writing.

Zeroing in on the track

The track forecast for Irma has been challenging because of:

A Florida landfall has been the favored prediction from CFAN’s calibrated ECMWF tracks since 9/03:

The NHC models have vacillated a bit more – in the diagram below, focus on the GFS (blue), HWRF (orange), HMON (green). 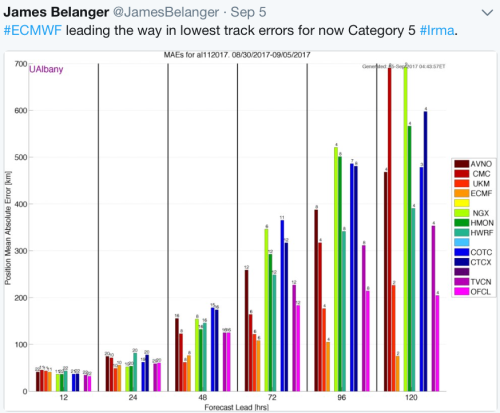 At the time of this post, Irma’s intensity has dropped to Cat 4 after an eyewall replacement cycle. 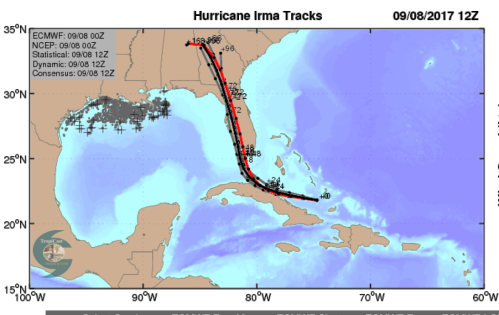 Here are the latest tracks from NHC (blue is GFS, green is HMON, orange is HWRF) 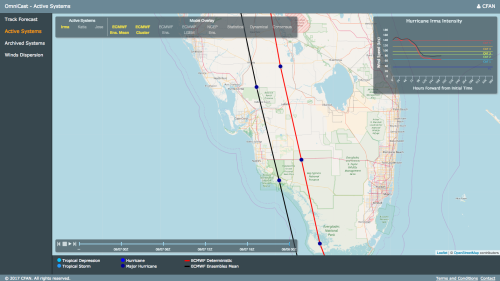 Here is max wind speed plot for Florida, based on CFAN’s calibrated winds from ECMWF DET: 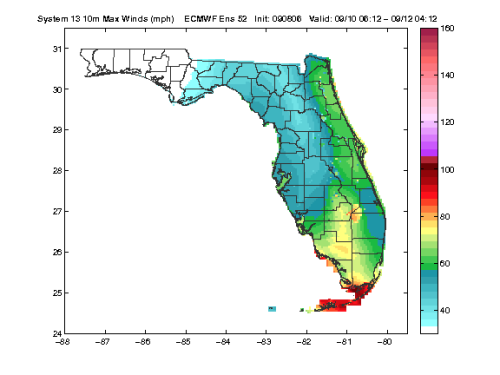 Here is an estimate of the storm surge from Irma (fortunately landfall on Sunday around 2 am will be low tide):

The worst case scenario for South Florida isn’t what happened with Andrew.  It’s what happened during the 1920s, with massive flooding of Lake Okeechobee.  The Herbert Hoover Dike was built to ameliorate this, but the NHC is warning of a possible breach to the dike.

Ever since Hurricane Harvey, the global warming – hurricane hysteria has ratcheted up to levels I haven’t seen since 2006.

NOAA GFDL has written a good article on Global Warming and Hurricanes.  Their main conclusions:

I agree wholeheartedly with #1.  I agree qualitatively with 2-4, but GFDL has much greater faith in the climate models than I do (and of course the 21st century projections assume substantial warming, which I don’t necessarily agree with).  However, I much prefer their model-based quantitative estimates (but they need some serious uncertainty estimates, including structural uncertainty), relative to hysterical arm waving by Mann and Trenberth using undergraduate basic thermodynamics reasoning.  There is nothing basic or simple about hurricanes.

I include this text from my 2010 post Hurricane Katrina – 5 years later, particularly relevant given the cool SST values that Irma formed and intensified.

The relationship between sea surface temperature and hurricane intensity. The causal chain for global warming to increase hurricane intensity has been argued to occur via the increase in sea surface temperature (SST) (e.g. Curry et al. 2006 ).  A nominal SST threshold of 26.5-27oC is used as a criterion for tropical cyclogenesis, and a nominal threshold of 28.5oC for intensification to a major hurricane. Some new insights into the relationship between a warming climate and hurricane intensity is suggested by Hoyos and Webster (2010, forthcoming).  During the latter half of the 20th century, the tropical warm pool defined by the isotherm of 28oC has expanded in area.  However, the region of tropical cyclogenesis has not expanded, owing to the area of convective activity remaining nearly constant.  Hoyos and Webster argue that the temperature threshold for tropical cyclogenesis increases as the average tropical ocean temperature increases.   It is the increasing intensity of the convection with warmer temperatures that seems to be the link between SST increase and hurricane intensity, rather than the absolute value of the SST itself.  Further, the location of the intense convection is related to the difference between the local SST and global tropical average SST, rather than to the absolute value of the SST itself (Vecchi et al. 2008)

This is particularly relevant for interpretating the formation of extremely strong hurricanes in the early half of the 20th century, when SSTs were significantly cooler.

At some point, probably in the 2020’s, the Atlantic Multidecadal Oscillation (AMO) will flip to the cool phase (which typically lasts several decades), which is associated with low Atlantic hurricane activity.  At this point, natural variability (interannual, decadal, multi-decadal) is swamping any potential signal of global warming on hurricanes.

After I wrote the above article, I spotted this article by Chris Mooney:  The science behind the strange hurricane ‘drought’ — and its sudden end.  This para illustrates the level of disagreement and faulty reasoning on this whole topic:

“A debate continues about why the 1970s and 80s were relatively quiet in the Atlantic,” said MIT hurricane researcher Kerry Emanuel. “Some believe that it was the consequence of a natural climate oscillation called the Atlantic Multi-decadal Oscillation (AMO), while others, including me, think is was mostly a consequence of sulfate aerosol pollution.”

IMO, the arguments supporting the aerosol theory don’t hold up.   The IPCC AR5 and more recent research, showing that sulfate aerosol forcing of climate (generally, and also mid 20th century) is much smaller than thought circa the AR4.  Not to mention the massive amounts of sulfate being emitted by Asia in recent decades.

That said, this is the biggest and baddest landfall strike in the U.S. in a long time.  Irma is worse than Andrew (1992) and Wilma (2005), which were also Cat 5; Irma has a large horizontal extent, which means larger swath of hurricane force winds, bigger storm surge, more rainfall and tornadoes.

Lets see how it plays out, but I anticipate that this will go much better than Hurricane Harvey and Houston.

I’ve been talking with Floridians that remember Andrew (1992).  I reminded them how MUCH better the forecast information is now, relative to 1992.

Apart from Florida, Georgia and the Carolinas are also facing impacts from Irma.  Atlanta could see hurricane force winds!  From a massive storm like this, there will be perhaps a hundred tornadoes generated inland, mostly in the right forward quadrant of the storm.

Huge thanks and acknowledgements to CFAN’s Jesse Marks, Violeta Toma and our software engineers for sleepless nights and doing a tremendous job in ensuring the timely delivery of our forecast products in this very challenging operational environment.  I will need to dish out some good bonuses in their September pay checks.

This entry was posted in Hurricanes. Bookmark the permalink.