Renewable resources and the importance of generation diversity

How feasible are calls for 100% renewable energy?

In previous columns I’ve discussed characteristics of wind and solar generation that will result in increasing concerns as they grow to provide an increase portion of the electric supply. PJM has recently made available a study which discusses these issues and furthermore PJM has done significant modelling to quantify these concerns. This analysis should put to rest any mistaken beliefs that current renewable resources perform just as well as conventional resources as regards grid support. The available reports do not provide full access to the findings and data, but I will attempt to highlight key findings. I strongly recommend that interested denizens read the reports for themselves. I welcome comments, observations and interpretations that I may have missed. 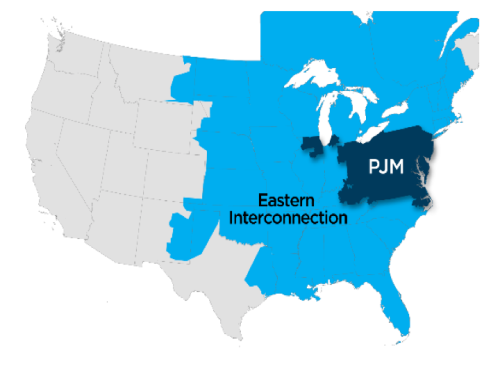 PJM is a regional transmission organization (RTO) located in the Northeastern US that coordinates the movement of wholesale electricity in all or parts of Delaware, Illinois, Indiana, Kentucky, Maryland, Michigan, New Jersey, North Carolina, Ohio, Pennsylvania, Tennessee, Virginia, West Virginia and the District of Columbia. The referenced documents can be found at:

The Appendix document is a good reference. It discusses the drivers and importance of fuel diversity within the USA. The document also notes challenges associated with having limited supply portfolios. The importance of diversity is highlighted by discussions of the polar vortex, the Aliso Canyon storage leak, the South Australia blackout, nuclear dependence in France, Japan’s post-Fukishima energy shift, water scarcity and hydro and the German Energiewende. PJM makes a good for having a diverse portfolio of generation resources. However their report also shows that diversity in itself is not enough. There must be a mix of important attributes contained within the generation mix for reliable system performance. In various generation portfolios the reliance upon the differing resource types will shift which consequently will impact overall system reliability.

The PJM document provides a good explanation of grid concerns as discussed in Climate Etc. postings such as All megawatts are not equal, Transmission planning: wind and solar and Renewables and grid reliability. Wind and Solar are identified as generally not having as desirable characteristics as conventional fossil fuel generation in terms of attributes which support reliability. These characteristics include essential reliability services (frequency response, voltage control and ramp capability), fuel assurance, flexibility and black start capability. Based upon the characteristics of the differing types of generators and their respective reliability attributes within potential generation mixes, PJM numerically assessed the overall reliability of various portfolio mixes.

Portfolios are identified as to their risk impacts as follows: 1) infeasible 2) at risk for underperformance, (3) less than baseline, or 4) greater than baseline. Of the studied portfolios, 27% were deemed to have “desirable” characteristics. This “desirable” category include the greater than baseline portfolios and a subset of the less then baseline portfolios which had some consistency of high level performance. Note that the portfolio’s identified as desirable still exhibited some concerns as the study notes that, “Only 34 of the 98 portfolios which were classified as desirable were resilient when subjected to a polar vortex event.” A portfolio deemed in any of these three groups, less then baseline, at risk, or infeasible, would be expected to provide lower levels of reliability than are seen today.

As noted above the complete findings are not available in the provided documentation. I will reference and discuss excerpts from the report which cover the potential for renewable penetration. The study found that:

These findings are very bad news for someone who is hoping that a transition to greater wind and solar would allow those resources to provide say a 30% share of energy needs within the basic framework of today’s bulk grid. From what was provided I could not ascertain what penetration levels would correspond to the “at risk for underperformance” category but that should be expected to hit well before the 20% upper bound for feasibility. Below that boundary would be portfolios with lesser amounts of wind and solar which provide decent reliability, but less than current baselines.

Beginning on P# 31 the document discussed “Desirable” portfolios. Natural gas and coal are identified as performing well across portfolios because they exhibit a majority of the generator reliability attributes. The document noted limitations with wind and solar:

I am unsure of what to exactly make of this paragraph. Apparently they identified an “upper bound” for wind and solar in the desirable category, but they did not choose to share it. They also are indicating that this level of wind and solar (which must be below the 20% infeasible bound) needs to be paired with gas and coal as opposed to nuclear. (Note- Reducing nuclear and increasing coal and gas to support wind and solar does not appear advantageous for CO2 reduction. This problem emerges because nuclear generation, as currently operated in the US, is largely kept at fixed output levels. As has been observed in previous discussions, if nuclear power were allowed to ramp up and down and also able to change their governor responses in reaction to voltage excursions or other disturbances on the system it would be a better candidate for pairing with wind and solar.) Finally what are the “unprecedented levels” which can be achieved by pairing wind and solar with coal and gas? We know that it is less than the 20% level which makes them infeasible. Might it only be 5%, could it be as high as 15%?   Unfortunately we cannot get a “worst case” from these published findings. The details are fuzzy, but the report clearly shows that PJM does not believe that they can approach even 25% renewables through wind and solar without encountering serious reliability concerns.

Overall the document recognizes the need for diversity, but it is not a call for mindless diversity. It notes:

I agree with the above statement. Some areas will be able to integrate more renewables than others because of the attributes of other resources within their portfolios. For example, hydro resources provide high levels of reliability attributes. I did not observe the PJM document to be concerned with alternative hydro scenarios. That is reasonable in that the amounts of hydro resources available are largely fixed. If there are significant amounts of hydro in the area, greater levels of renewables will be able to be accommodated. If substantial hydro is not available, the ability to achieve high levels of renewable penetration through the addition of wind and solar and the absence of fossil fuels will be greatly constrained as critical generation attributes from other resources will need to be present for system support.

One of the Denizens in a comment on another post was lamenting that the PJM “story” did not get any coverage here although I had covered Secretary Perry’s concern for transmission risk. He stated, “Now, as anyone in the Industry knows, a major companion story to this was the PJM story that their system is/will continue to be stable with significant Renewable penetration levels”   He cited this article, US Transmission Operator Confirms System Remains Reliable with More Gas & Renewables. The commenter believes that the dialogue here at Climate Etc. is “framed” in extremes such that we only compare 100% renewables versus 0% fossil fuels and nuclear. He mentioned that I and other posters make no attempt to discuss energy on “common ground”.

While I don’t think the PJM document tells us a lot about what levels of renewable penetration provide stability. (It more highlights where system problems emerge.) I would like to be clear that I believe that renewables including wind and solar have a role today and should be expected to have a growing role in the future. I believe that certain levels of intermittent renewables can be accommodated without or with minimal adverse impacts upon the system. It’s never been my intention to support anyone who is arguing against such propositions. I seek to limit false “inferences” from my writings, but I cannot be responsible for “inferences” those on the fringes might draw.

As regards the commentator, I think our efforts to reach common ground may be hindered by our respective uses of the words like “significant”. I might say “significant” penetration levels of wind and solar will raises serious reliability concerns. He might say PJM will continue to be stable with significant renewable penetration levels. I think both statement could be seen as absolutely correct and true. If by significant I mean 30% penetration of wind and solar (or more) my statement is strongly supported by the PJM findings. But the commentator’s statement as concerns the PJM findings could be considered accurate if he see’s significant as being 5% (or less) penetration. That is still much greater than what we are seeing today, but is certainly much less than the 20% where serious problems emerge on the PJM system.

I support reasonable calls for renewable resources. I encourage sharing positive information as regards the current and potential capability of our power systems. Unfortunately I think the article he referenced is typical of the poor journalism found in much of the media and it at least mischaracterizes PJM’s findings. As regards the renewable treatment in the actual PJM report, for the general public I think the average reader would walk away thinking the challenges of integrating more renewables with the grid are more complex and difficult than they might have expected. I would expect those who have expressed concerned about the reliability impacts of expanded renewables to feel somewhat vindicated by the findings of the PJM report. I would expect those who think that the German experiment has demonstrated that renewables pose no threat to reliability, to feel those views were challenged and threatened by the actual PJM documentation. I encourage everyone to read the referenced article, the PJM publication as well as my piece and make their own determinations as to whether the PJM study is a green light towards increased mandates and incentives, whether it should serve as a caution or whether you perceive it some other way. I’d appreciate any feedback on this.

I see calls like the recent one from the Atlanta City Council to target 100% renewables. I read stories that stretch credibility about the potential capabilities of wind and solar. I see basic concerns about grid reliability dismissed because of extreme ignorance paired with fundamental misunderstandings. I think overall there is a great asymmetry in misinformation as regards renewables and the grid. (That asymmetry is not likely not a pronounced here at Climate Etc. and perhaps could run in the other direction.) However if there is a “significant” group within the energy/environment discussion arena which has any “significant” power or influence and they are operating on misconceptions around the grid and power supply such that those misconceptions are working to retard the advance of renewables and supportive technology, I will gladly work on a column to seek to correct any such misimpressions.

Moderation note:  As with all guest posts, please keep your comments civil and relevant.

425 responses to “Renewable resources and the importance of generation diversity”