There is no doubt that interglacials change sea level (SL). And that sea level rise (SLR) can be dramatic on millennial interglacial time scales.

That’s what happens when the vast Laurentide ice sheet (among others) melts. But sea level has changed relatively little in the past 7 millennia. We know from archeology that it rose somewhat in the Medieval Warm Period, dropped some during the Little Ice Age, and has been rising slowly since based on tide gauge records. This mostly natural variation is, from 1950-2000, about +1.8mm/year (reference follows below). That rate is no cause for alarm. We coped with it for the past century, and can cope with it for the next.

The anthropogenic global warming (AGW) question is whether SLR will accelerate into catastrophic AGW (CAGW) requiring urgent mitigation. Warmunists argue yes, with many alarming images such as National Geographic’s photo-shopped Statue of Liberty half submerged (which would require that all of Greenland and Antarctica melts before the next glaciation sets in). We do know that in the last interglacial (the Eemian) the sea level high stand was about 6.6 meters above present sea level, so the ice sheets did melt more with global temperature about 2C higher (and perhaps 8C higher in Greenland). This took about 3000 years to achieve, at a rate of 660cm/30 centuries, or 22 cm/century, or roughly 2.2mm/year. That rate is no different than the best estimate of present ‘true’ SLR found in what follows. A previous guest post Tipping Points argued there were no realistic concerns about sudden abrupt acceleration of SLR. This post discusses the same issue from a historical SLR perspective.

There are two parts to the SLR alarm meme:

Ergo, future AGW requires urgent mitigation. Hansen says up to 1 meter SLR by 2060 (and maybe more with tipping), so goodbye Miami Beach. The Obama administration uses occasional recent high tide flooding there to support his climate urgency– without revealing that Miami Beach is 2/3 fill dredged from Biscayne Bay, and is subsiding as the fill compacts and as the underlying Biscayne Aquifer also subsides as it is drained to provide Miami’s fresh water.

There are many seemingly authoritative graphics floating about that support the SLR acceleration alarm. 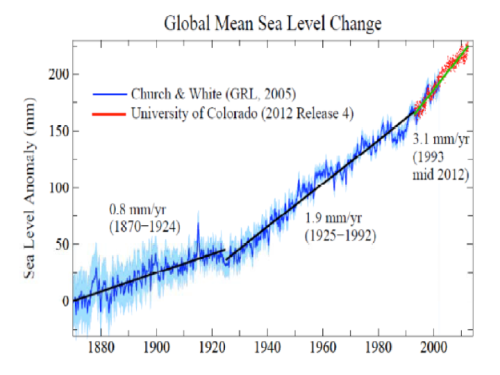 This seemingly authoritative graphic has been constructed out of two deceptions.

(2) Splice on satellite measurements since 1993 that fail the closure test below: observed SLR should roughly equal the sum of observed sea level contributions from thermosteric rise (OHC causes the estimated water column to expand as it warms) plus ocean mass increase (water volume from ice sheet losses).

Side comment: in the SLR literature, there are also two lesser possible SLR contributors: mountain glaciers, and groundwater extraction. Both are sufficiently uncertain and small that they are ignored in this post. There is little doubt that glaciers have been receding most places since 1900, for example in the Himalayas. But IPCC AR4 issued a retraction concerning its alarming conclusion that they would disappear by 2030. Most terrestrial groundwater is annually replenished; else water tables would fall. That which is not replenished (e.g. the Ogallala Aquifer) is de minimus in the context of global SLR. (Ice density at 0C is 0.9187, water is 0.9998, so if 365 Gt ice (roughly 365 cubic km) equals 1mm of SLR [reference below] then 1mm of SLR requires adding about 335 cubic kilometers of water. Ogallala withdrawals are about 26-30 cubic km/year.)

SLR fluctuating and land not standing still are both illustrated by Juneau Alaska:

So, what is the ‘true’ tide gauge measured SLR? There are three ways to estimate this: some big average of a lot of tide guages hoping land motions cancel out (the Church and White example above, ~1.8mm/yr), model GIA corrected tide guages, and direct measurement differential GPS corrected tide guages.

There have been a number of papers that have used various subsets and time frames of the ‘stationary’ (GIA or dGPS corrected) PSMSL tide guages to infer more reliable estimates of SLR as noted by the IPCC. Past half-century estimates range from about 1.7mm/year to about 2.0mm/year, with little to no acceleration. The most relevant recent estimate is Mörner, 2.2mm/year from 1970-2010 during the period when AGW was supposedly happening. This seems plausible, as the average dGPS tide gauge SLR for Western Europe (2.2mm/yr), the US (2.1mm/yr), Japan (2.3mm/yr), and Australia (2.2mm/yr) over roughly the same period are all similar. Also proving the sea isn’t truly level, and dGPS isn’t completely accurate.

As the second chart above illustrated, satellite altimetry tells a very different story, and that story has ‘accelerated’ over time. The present NASA estimate from 1993 to the present is 3.4mm/year (with GIA +0.32mm/yr). So is the estimate from University of Colorado (with GIA +0.31mm/yr). 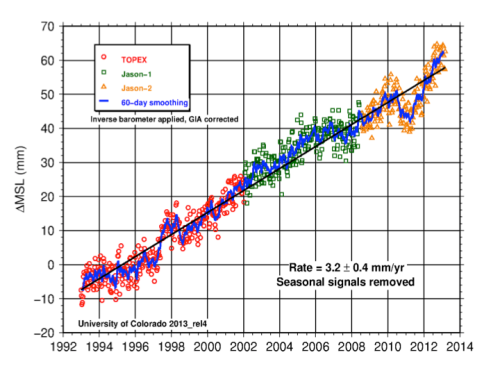 The ‘acceleration’ arises from Jason-2. But the Jason-2 specification is for instrument stability not exceeding 1mm/year of drift.[i] The acceleration could just be instrument drift. Certainly there has been no causative change in global temperature; Jason-2 is flying during the infamous global warming ‘pause’.

The dGPS tide gauges do not agree with satellite altimetry by a factor of about (3.4/2.2) 1.5x. So which is more correct? SLR should roughly equal the sum of thermosteric rise and ice mass loss. Lets examine those components separately.

Antarctica is controversial. Perhaps the best estimate is the new dGPS estimated GIA correction to GRACE, which is 135Gt/year, or 0.37mm/year. Say 0.4.

The sum is 1.2+0.7+0.3 = 2.2mm/year. Cazenave’s independently derived estimate from several other references in NCC (paywalled, caption to figure 3) is also 2.2mm/year. This agrees precisely with the dGPS corrected SLR of 2.2mm/year. There is exact closure.

There is anything but closure with the satellite altimetry. NASA presently says on one web page that thermosteric rise is 0.8mm/yr, mass gain is 1.8mm/yr, and that SLR is 3.4mm/yr. NASA apparently does not realize that 0.8 + 1.8 = 2.6 ≠ 3.4. NASA climate stuff is seemingly off in a lot of places–temperatures, SLR, Antarctic ice loss. . .

There have been three attempts to reconcile satellite SLR closure. One set of three similar papers cherry pick short time frames when satellite SLR was less (2.4, 2.5, 2.4mm/yr, respectively), and throws in higher Antarctic ice loss contributions. [ii], [iii], [iv] A second argues that satellite altimetry signal processing is wrong (Topex in particular) so the satellite era is really only 2.6mm/year (but accelerating with Jason-2) with closure achieved using higher Antarctic ice loss contributions. The third argues that NASA’s +0.3 GIA is modeled wrong, and according to Peltier’s ICE-5g(VM2) GIA model it should really be -1 with corrected SLR (3.4 -0.3 – 1) 2.1mm/year and closure.[v] None of these attempts seem very credible.

Tide gauges cannot be relied on for short periods, or without vertical land motion corrections. Correctly used, they presently estimate about 2.2mm/year. That estimate closes nicely with thermosteric rise and ice mass loss. The satellite altimetry SLR used to assert SLR acceleration is inconsistent with tide gauge estimates and has a large closure p

JC note:  As with all guest posts, please keep your comments civil and relevant.

This entry was posted in Climate change impacts, Oceans. Bookmark the permalink.

206 responses to “Sea level rise, acceleration and the closure problem”