Mechanisms for Warming of the Oceans

This paper describes a model that uses the basics of heat transfer to demonstrate than an increase in downwelling infrared radiation associated with increased CO2 reduces heat loss from the mixed layer of the ocean, causing the ocean to warm.

This Posting is a brief summary of the full paper (18 pages) that can be obtained athttp://home.earthlink.net/~drdrapp/ocean.heating.v3.pdf

Climate models indicate that when the CO2 concentration increases above the pre-industrial level of about 280 ppm, there is a consequent increase in downward back IR radiation impinging on the surface of the Earth, including the world oceans. A doubling of the CO2 concentration results in a downward radiative forcing at the surface of about 1 W/m2. Over the past half century the forcing averaged about 0.4 W/m2. Questions arise as to whether, how, and how much does this heat the oceans? The oceans have a heat capacity about 1,000 times greater than the atmosphere and land surface. Although air temperatures may change much more rapidly than ocean temperatures, it is the ocean temperature distribution that will ultimately determine the climate of the Earth.

There is considerable evidence that sea surface temperatures (SST) have warmed significantly over the course of the 20th century. There is also evidence that on average, the bulk oceans have warmed over this time period but the temperature gains were smaller. Nevertheless, the oceans are so vast that this represents a very large amount of heat. While the data on ocean warming leaves much to be desired, there seems to be little doubt that the oceans have acquired a significant amount of heat over the last five decades. Aside from the still unsettled issue of specifying the ocean warming to higher accuracy, the question arises as to what factors caused the ocean warming. Had there been long-term systematic increases in solar intensity and/or decreases in cloud cover, that would certainly have contributed significantly to ocean warming. There are several models that attempt to estimate how the solar intensity has varied during the 20th century, but they all make assumptions that cannot be validated and therefore they remain highly speculative. Estimates of global variation of cloud cover have been made by a number of investigators. Dai et al. (2006) admit “large inadequacies in monitoring long-term changes in global cloudiness with surface and satellite observations” and the sub-title of their paper is “A Tale of Monitoring Inadequacies”.

A number of websites and blogs currently claim that downwelling infrared radiation from greenhouse gases cannot heat the oceans. For example, hockeyschtick asserts: “since the LWIR re-radiation from increasing ‘greenhouse gases’ is only capable of penetrating a minuscule few microns (millionths of a meter) past the surface and no further, it could therefore only cause evaporation (and thus cooling) of the surface ‘skin’ of the oceans”. Hockeyschtick further asserts:  “It is impossible for a 1.7 W/m2 increase [predicted by the IPCC due to man-made greenhouse gases] in downward ‘clear sky’ atmospheric LWIR flux to heat the oceans.”  Steven Goddard  ridicules Livermore scientists for claiming that rising greenhouse gases warm the oceans. Finally, Tallbloke asks: “Since the ocean is on average warmer than the atmosphere, the energy flux across the ocean/atmosphere interface is on average carrying heat from the ocean to the air…. So given the general direction of the motion of the energy, how can infrared energy be pushed into the ocean, when it can’t penetrate the surface further than its own wavelength?”

If these claims were correct, then any warming of the oceans would have to be attributed to increases in solar intensity or decreases in cloud cover. This paper describes a model that uses the basics of heat transfer to demonstrate than an increase in downwelling infrared radiation associated with increased CO2 reduces heat loss from the mixed layer of the ocean, causing the ocean to warm.

The profile of temperatures below the surface at a tropical location is shown schematically in Figure 3.

Figure 3. Schematic temperature profile in a tropical ocean. The initial curve (A) refers to equilibrium before applying a forcing to the surface. The short-term curve (B) shows the initial response to the forcing. This graph is not to scale. The difference in temperatures between the mixed layer and the ocean surface was exaggerated to make the graphic clearer.

Initially, there is a temperature profile (A) for the equilibrium state before applying a forcing to the surface. The surface is cooler than the bulk ocean because of heat loss to the atmosphere. The short-term curve (B) shows the initial response to application of a forcing. The initial temperature rise at the surface is  ΔT2 due to absorption of radiation. As a result, the temperature difference between the surface and the bulk mixed layer of the ocean decreases from ΔT1 to [ΔT1 – ΔT2]. This reduces the heat flow from the bulk ocean to the surface and the bulk ocean begins to warm. As it warms, there is a progression of temperature profiles until a new equilibrium is established at a new ΔT. Figure 4 shows the same information in greater detail, with curve C representing an intermediate stage in the passage from no forcing to a new equilibrium under forcing represented by curve D. The ultimate temperature rise of the mixed layer of the ocean is ΔT3 in this figure.

The ultimate new equilibrium established after passage of sufficient time is shown as (C). This graph is not to scale. The difference in temperatures between the mixed layer and the ocean surface was greatly exaggerated to make the graphic clearer. 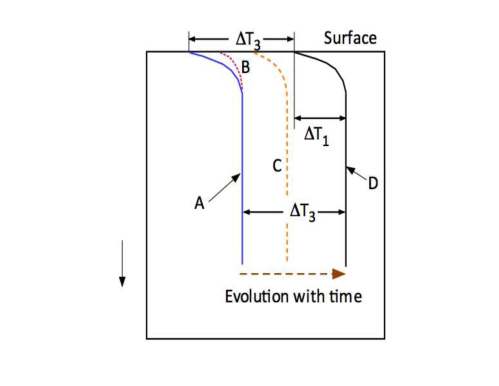 Figure 4. Schematic temperature profile in a tropical ocean. The initial curve (A) refers to equilibrium before applying a forcing to the surface. The response (C) shows an intermediate stage in the process as time progresses. Curve (D) is the new equilibrium.

The model involves the following steps:

(2) Write a new energy flux equation about the ocean-atmosphere interface, after application of the forcing introduced by increased CO2 concentration in the atmosphere. This defines the new equilibrium rate of heat loss by the bulk mixed layer in the presence of doubled CO2.

Why the Ocean Warms

In each model, one starts with the unforced ocean and the air above it. Then the forcing (~ 1 W/m2) is introduced into the energy balance equation in terms of the latent heat loss, the sensible heat loss, and the net back radiation, and the forcing.

Small changes in assumptions about the air above the ocean produce large changes in the temperature rise. For example, if the calculation is repeated with a wind speed of 5 m/s instead of 3 m/s, the temperature rise for 1 w/m2 forcing is reduced from 0.6°C to 0.25°C. If the wind speed is reduced to 2 m/s the calculation becomes unstable. As Watts (1980) emphasized, “The surface heat flux calculation is very, very sensitive to small changes in the components of the heat balance”.

The forcing at the surface due to doubling of CO2 from the pre-industrial value is about 1 to 1.2 W/m2. What is not clear is to what extent this basic forcing is augmented by radiation from a warmer troposphere. Ramanathan (1981) concluded that this effect is very large but his results seem grossly exaggerated.

One thing we can assert however, is that warming of the oceans by an increase in downwelling infrared radiation to the surface is an efficient process, and the initial rate of heat loss by the mixed layer is only slightly less than the magnitude of the imposed forcing. The average surface forcing due to increased CO2 over the past 55 years was roughly 0.4 W/m2. It is therefore not unreasonable to expect that the upper mixed level of the ocean would have warmed by an input of roughly this amount over that time period. Experimental data on warming of the oceans indicate that over the past ~50 years, the average warming was due to a flux of about this magnitude.

JC note:  This post was submitted via email. Here is Donald Rapp’s biosketch.  I worked with Donald Rapp to shorten the post relative to his original paper.  As with all guest posts, please keep your comments relevant and civil.

425 responses to “Mechanisms for Warming of the Oceans”