Soil carbon: permanent pasture as an approach to CO2 sequestration

By Robert I Ellison, aka Chief Hydrologist

Eliminating 20 ton/ha soil carbon deficit in ‘permanent pastures’ may be sufficient to offset anthropogenic emissions for on the order of a decade – but with other benefits to soil health and downstream environments.

Tony Brown linked to a paper on soil carbon.  It is an interesting result and worth discussing.   As the abstract suggests – CO2 emissions from soils should increase with temperature.  This study draws together 306 studies of measured soil respiration between 1961 and 2008 – drawing on 1,112 data points – to quantify soil respiration changes.

Abstract.  Soil respiration, RS, the flux of microbially and plant-respired carbon dioxide (CO2) from the soil surface to the atmosphere, is the second-largest terrestrial carbon flux. However, the dynamics of RS are not well understood and the global flux remains poorly constrained. Ecosystem warming experiments, modelling analyses and fundamental biokineticsall suggest that RS should change with climate. This has been difficult to confirm observationally because of the high spatial variability of RS, inaccessibility of the soil medium and the inability of remote-sensing instruments to measure RS on large scales. Despite these constraints, it may be possible to discern climate-driven changes in regional or global RS values in the extant four-decade record of RS chamber measurements. Here we construct a database of worldwide RS observations matched with high-resolution historical climate data and find a previously unknown temporal trend in the RS record after accounting for mean annual climate, leaf area, nitrogen deposition and changes in CO2 measurement technique. We find that the air temperature anomaly (the deviation from the 1961–1990 mean) is significantly and positively correlated with changes in RS. We estimate that the global RS in 2008 (that is, the flux integrated over the Earth’s land surface over 2008) was 98±12 Pg C and that it increased by 0.1 Pg C yr-1 between 1989 and 2008, implying a global RS response to air temperature (Q10) of 1.5. An increasing global RS value does not necessarily constitute a positive feedback to the atmosphere, as it could be driven by higher carbon inputs to soil rather than by mobilization of stored older carbon. The available data are, however, consistent with an acceleration of the terrestrial carbon cycle in response to global climate change.

To put this in context, human emissions are 9.7 PgC – which is equal to 9.7 billion tons carbon content, 9.7 Gigaton C and 34.7 billion tons CO2.  The increase in soil respiration at present equals some 20% of human emissions – although whether this results from increased biomass – and is therefore carbon neutral – or as a result of drawdown in soil carbon is unknown.

From a report published by Dairy Australia:

‘Apart from its potential to offset anthropogenic emissions, soil carbon sequestration has numerous other benefits such as improved soil fertility for food production. Specific improvements include:

‘Agricultural land (also agricultural area) denotes the land suitable for agricultural production, both crops and livestock. It is one of the main resources in agriculture. The standard classification (used, e.g., by FAO — Food and Agriculture Organization of the United Nations) divides agricultural land into the following components, with their respective global land area in 2009:

Permanent Pastures (33,556,943 km²) – areas for natural grasses and grazing of livestock, such as Meadows and pastures.’

So if we assume – say – a 20 ton/ha soil carbon deficit in ‘permanent pastures’?

Sufficient to offset anthropogenic emissions for on the order of a decade – but with other benefits to soil health and downstream environments.

Figure 1 shows the relative declines in soil carbon following conversion to farming.  Result vary and are worse in degraded soils.

IPCC AR4WG1 Figure 7.3 brings it into a global context in the carbon cycle.  Soil carbon stores are very significant and provide an obvious short term opportunity for carbon mitigation. 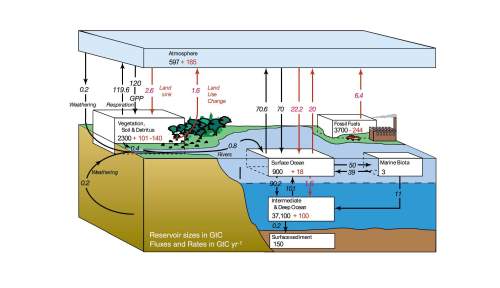 Figure 2: ‘IPCC AR4WG1 Figure 7.3. The global carbon cycle for the 1990s, showing the main annual fluxes in GtC yr–1: pre-industrial ‘natural’ fluxes in black and ‘anthropogenic’ fluxes in red (modified from Sarmiento and Gruber, 2006, with changes in pool sizes from Sabine et al., 2004). The net terrestrial loss of –39 GtC is inferred from cumulative fossil fuel emissions minus atmospheric increase minus ocean storage. The loss of –140 GtC from the ‘vegetation, soil and detritus’ compartment represents the cumulative emissions from land use change (Houghton, 2003), and requires a terrestrial biosphere sink of 101 GtC (in Sabine et al., given only as ranges of –140 to –80 GtC and 61 to 141 GtC, respectively; other uncertainties given in their Table 1). Net anthropogenic exchanges with the atmosphere are from Column 5 ‘AR4’ in Table 7.1. Gross fluxes generally have uncertainties of more than ±20% but fractional amounts have been retained to achieve overall balance when including estimates in fractions of GtC yr–1 for riverine transport, weathering, deep ocean burial, etc. ‘GPP’ is annual gross (terrestrial) primary production. Atmospheric carbon content and all cumulative fluxes since 1750 are as of end 1994.’ – ihttp://www.gfdl.noaa.gov/anthropogenic-carbon-cycle

Below is a map of global soil carbon intensity. The high carbon content in high northern latitudes is because of slower decomposition in northern soils.  These soils in warmer conditions release more carbon dioxide as respiration increases.

Figure 4 shows areas of sinks and sources for carbon dioxide in the oceans.  Areas of sink occurs with cooler water.  Sources are in the high respiration tropical and subtropical water – notably in the ENSO zone from cold, nutrient and carbon dioxide rich water upwelling from deeper waters. 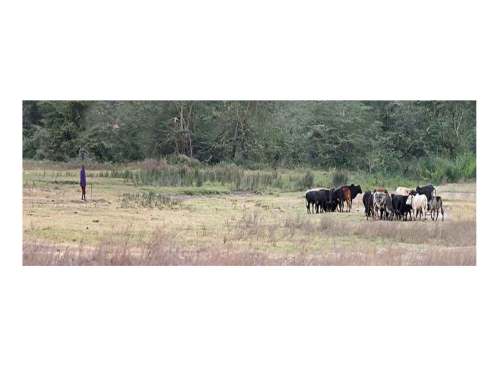 Here’s a guy who is all cattle and no hat.  Although pastures can be restored globally to mitigate CO2 – it works only as much as the economic benefits of newer pasture techniques works for individual farmers. I suppose that makes it business as usual under the UN rules.

158 responses to “Soil carbon: permanent pasture as an approach to CO2 sequestration”