Are human influences on the climate really small?

My Wall Street Journal article of 9/20/14, Climate Science is Not Settled , contains the paragraph

Even though human influences could have serious consequences for the climate, they are physically small in relation to the climate system as a whole. For example, human additions to carbon dioxide in the atmosphere by the middle of the 21st century are expected to directly shift the atmosphere’s natural greenhouse effect by only 1% to 2%. Since the climate system is highly variable on its own, that smallness sets a very high bar for confidently projecting the consequences of human influences.

Unfortunately, the necessary brevity and non-technical nature of a newspaper article has created some confusion about what I meant and how I arrived at the 1-2% figure. I write here to explain something that’s quite simple, but has profound implications.

AR5 Figure SPM.4 shows the total anthropogenic direct perturbation (i.e., absent feedbacks) of this balance (the “forcing”)to be some 2.3 ± 1 W/m2, less than 1% of the downward thermal flux or less than 0.5% of the total downward flux. If the atmospheric concentration of CO2 were to rise to 550 ppm with all other anthropogenic effects unchanged, this perturbation would rise to be 3.9 W/m2.  However one quantifies it, we have a percentish exogenous perturbation, which will result in percentish shifts of the energy flows, even after feedbacks (which are thought to roughly double the response). 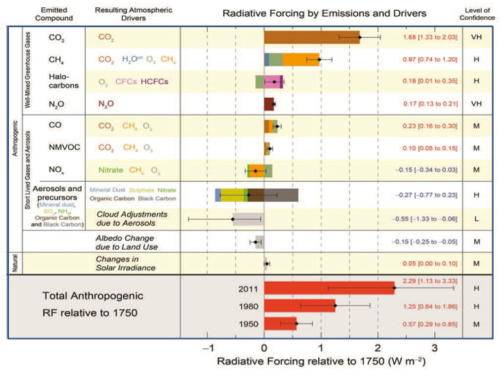 An alternative way of seeing the physical smallness of anthropogenic influences is to look at how the long-wave absorptivity of the clear sky increases with CO2 concentration – this is the physical input to GCMs that varies directly. Figure 4 from Harde shows that a doubling from the pre-industrial 280 ppm to 560 ppm increases the absorptivity by about 1% on a base of 82%, or, again a percentish shift. An even simpler indication of the percentish influence is to note that a 3 C mean global surface temperature increase on a base of 288 K is also about a 1% effect. 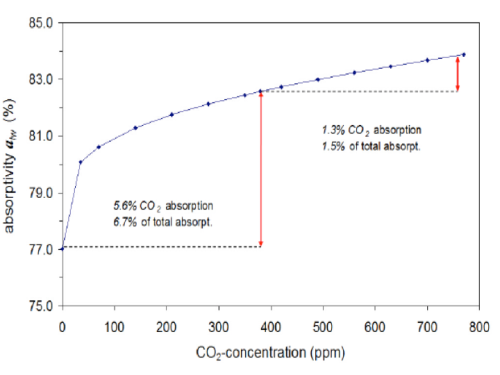 The physical smallness of anthropogenic influences, which comes as a surprise to many non-climate-expert scientists, has profound implications for climate understanding and modeling.   First, it means precision observations are required to see the climate response. Second, it means that natural variations can easily overwhelm human influences, at least on multidecadal scales (witness the current stasis in global mean surface temperature). And finally, because life at the 1% level is rich, the models have to get many small phenomena right to confidently isolate and project the response to anthropogenic effects. Indeed, if the anthropogenic perturbation weren’t small, the detection/attribution discussion would be much more convincing than it is (see, for example, the APS Workshop transcript). Of course, since CO2 is an enduring perturbation to the climate system, at least on the scale of centuries, its effects may eventually grow large enough to clarify the situation.

The annotated version of my WSJ article contains supporting material for some of other points I made. Virtually all of the references are from IPCC AR5 WGI, so they are surely settled science.

JC note:  This post arose from my email discussions with Steve Koonin, and issues raised in discussion on the previous thread about Koonin’s WSJ op-ed.  As with all guest posts, keep your comments relevant and civil.

This entry was posted in Greenhouse effect. Bookmark the permalink.

661 responses to “Are human influences on the climate really small?”