Why is there so much Antarctic sea ice?

The ship of fools fiasco brought widespread attention to the anomalously large amount of  sea ice in the Antarctic. Here is the recent history of Antarctic sea ice anomalies from UIUC: 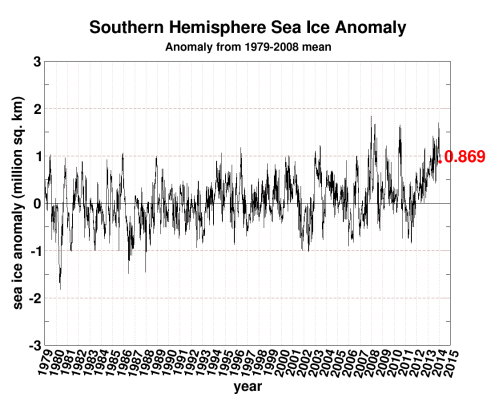 However, doesn’t Figure S5 in the supplementary material show that whatever the source of the Bootstrap issue, there is no doubt that Antarctic sea ice is increasing in both area and extent? The trends appear significant whichever of the three time series one chooses. Even if one discards Bootstrap altogether on the basis of this paper, the NASA Team series clearly shows significant increases. These two facts imply that the title of this paper is misleading, and so is much of the discussion and abstract.

Sunshine Hours refers to this paper as a ‘hail Mary pass.’  David Appell brought this paper to the attention of Sunshine Hours, so I thought it best to preemptively mention this. In any event, the satellite sea ice extent/area since 1979 is pretty robust, although there are some methodological uncertainties.  Actually during the melt seasons it is easier to interpret Antarctic sea ice extent than the Arctic sea ice extent, owing to the confounding factor of surface melt ponds in the Arctic.

Climate models simulate a decrease of Antarctic sea ice in recent decades.  Here is what the IPCC has to say, from Chapter 10:

Several recent studies have investigated the possible causes of Antarctic sea ice trends. Early studies suggested that stratospheric ozone depletion may have driven increasing trends in Antarctic ice extent, but recent studies demonstrate that simulated sea ice extent decreases in response to prescribed changes in stratospheric ozone. An alternative explanation for the lack of melting of Antarctic sea ice is that sub-surface ocean warming, and enhanced freshwater input possibly in part from ice shelf melting, have made the high latitude southern ocean fresher  and more stratified, decreasing the upward heat flux and driving more sea ice formation. An idealized simulation of the response to freshwater input similar to that estimate due to ice shelf melting exhibited an increase in sea ice extent, but this result has yet to be reproduced with other models. Overall we conclude that there is low confidence in the scientific understanding of the observed increase in Antarctic sea ice extent since 1979, due the larger differences between sea-ice simulations from CMIP5 models and to the incomplete and competing scientific explanations for the causes of change and low confidence in estimates of internal variability.

NSIDC has a new post Why is there so much Antarctic sea ice? Excerpts:

The reasons behind this increase are complex, and several recent studies show that scientists are still trying to understand them.

Part of the answer may be found in changes in atmospheric circulation linked to the Antarctic Oscillation, or Southern Annular Mode, which influences the large belt of air flows encircling the South Pole, called the circumpolar vortex. This oscillation varies on a decadal basis, alternating between negative and positive phases. Over the past few decades, it has shifted to more positive phases. “Positive phases are associated with a strengthening of the circumpolar vortex and intensification of the westerly winds,” said Jinlun Zhang, senior oceanographer at the University of Washington Polar Science Center. More intense winds have been whipping the Antarctic continent and battering the sea ice. “Ice floes converge in an area and cause an ice pile up, particularly along coastal areas,” Zhang said. More forceful collisions cause the ice to pile up along the floe edges, creating pressure ridges and producing thicker ice.

Antarctica’s windier climate may have another surprisingly distant source—in ocean currents half a world away. Researcher Xichen Li and his colleagues looked at the Atlantic Multidecadal Oscillation, a large-scale pattern in North Atlantic sea surface temperature that shifts between cool and warm phases. Similar to El Niño and La Niña, this oscillation affects temperature and rainfall worldwide, and now scientists think it is impacting Antarctic climate.

The North Atlantic is warming and staying warm, setting up far-reaching atmospheric patterns that affect the Antarctic Oscillation. In combination with the year-to-year influences from El Niño and La Niña, this pattern tends to intensify the westerly winds around Antarctica. It could also help explain regional differences around Antarctica: sea ice is increasing in some areas, while decreasing in others.

Additional culprits are the rising atmosphere and ocean temperatures around Antarctica. But how does warmer air and water create more sea ice? Overall warming alters the ocean heat flux, or the heat exchange between ocean, sea ice, and atmosphere, which typically regulates sea ice production.

As deep ocean temperatures around Antarctic rise, they increase ice shelf melt, according to a study led by Richard Bintanja. This meltwater is creating a cool layer near the surface of the ocean that promotes sea ice production. In addition, the meltwater is fresh, or much less salty and dense than surrounding saline ocean layers. So fresher meltwater floats upward, mixing with the cold surface layer, lowering its density. As this fresh layer expands, it forms a stable puddle on top of the ocean that makes it easier to produce and retain sea ice.

This growing fresh puddle changes the ocean heat flux. Zhang also studied this change, and his models showed that warming would increase sea ice, up to a point. “If the current warming continues, the increase in ice may continue for some time,” Zhang said.  But, the increase will likely not continue indefinitely. “If the warming gets stronger, there will come a point when ice growth is smaller than the ocean heat flux available to melt ice,” he said. Under those conditions, sea ice extent and volume will begin to decrease.

ShortlyIn a 2010 PNAS paper, Accelerated warming of the Southern Ocean and its impacts on the hydrological cycle and sea ice

The observed sea surface temperature in the Southern Ocean shows a substantial warming trend for the second half of the 20th century.Associated with the warming, there has been an enhanced atmospheric hydrological cycle in the Southern Ocean that results in an increase of the Antarctic sea ice for the past three decades through the reduced upward ocean heat transport and increased snowfall. The simulated sea surface temperature variability from two global coupled climate models for the second half of the 20th century is dominated by natural internal variability associated with the Antarctic Oscillation, suggesting that the models’ internal variability is too strong, leading to a response to anthropogenic forcing that is too weak. With increased loading of greenhouse gases in the atmosphere through the 21st century, the models show an accelerated warming in the Southern Ocean, and indicate that anthropogenic forcing exceeds natural internal variability. The increased heating from below (ocean) and above (atmosphere) and increased liquid precipitation associated with the enhanced hydrological cycle results in a projected decline of the Antarctic sea ice.

As per Google Scholar, the Liu and Curry paper has 31 scientific citations, which is pretty respectable for a paper published less than 4 years ago.  Nevertheless,the paper is not cited in the IPCC AR5 (at least in Ch 10), or in the NSIDC article.  Interesting.

In my recent Senate testimony, I quoted the following two sentences from the AR5:

My testimony resulted in the bunnies are spitting carrots at Rabett Run  Curry vs. Curry.

So, does my citing the AR5 on Antarctic sea ice seem inconsistent in any with with Liu and Curry (2010)?  I can rarely make sense of  the bunny logic, so I won’t bother trying here

So, from the vantage point of 2014, what is causing the increase in Antarctic sea ice?  The mechanism hypothesized by Liu and Curry seems operative to some extent, although it is not clear this the dominant process.  The Liu/Curry mechanism with fresh layer on the surface from precipitation shares some features with Bintanja’s mechanism with a surface fresh layer from ice shelf melt. Natural internal variability seems to be a strong factor; while the stadium wave analysis was for the Northern Hemisphere, there are clearly some connections with the Southern Hemisphere also.

So we have several mechanisms that seem to be operating, but we do not yet have a quantitative, predictive understanding of the increase in Antarctic sea ice extent.  Hence the statement made by the IPCC seems justified:

Also, I stand by this statement I made in my testimony:

Notwithstanding the simulations by climate models that reproduce the decline in Arctic sea ice, more convincing arguments regarding causes of sea ice variations requires understanding and ability to simulate sea ice variations in both hemispheres.

This entry was posted in Polar regions. Bookmark the permalink.

779 responses to “Why is there so much Antarctic sea ice?”